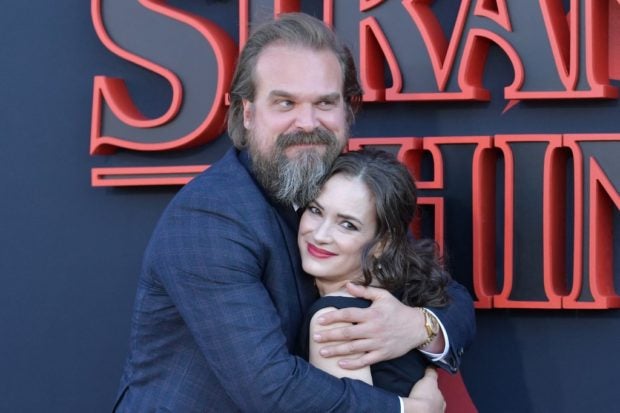 “Stranger Things” writers revealed that the series’ fourth season did not originally feature a second kiss between Winona Ryder and David Harbour, and the scene showing them smooching again was apparently improvised.

It appears fans were not the only ones who noticed the chemistry between Ryder and Harbour’s characters, Joyce Byers and Jim Hopper, as writers disclosed that the actors took things into their own hands during the series’ season 4 finale. This they told fans through the “Stranger Things” writers’ room official Twitter account (@strangerwriters) last Sunday, July 3.

In the said episode, Joyce was struggling with flashbacks of her ex-boyfriend Bob’s death, but Hopper assures her that they will survive together as they both lean in for a kiss.

“This kiss wasn’t scripted, Winona and David added it on the day of filming,” the writers stated while showing a moment from the finale.

The two characters had flirted and shared a kiss in an earlier moment in the season finale, though those interactions were scripted, as per Variety yesterday, July 4.

This kiss wasn’t scripted, Winona and David added it on the day of filming pic.twitter.com/9vSWwYliWU

Aside from this, the “Stranger Things” writers also revealed two lines that were actually improvised by the actors, as per their Twitter posts, also last Sunday.

The final words of Eddie Munson, “I love you, man,” were actually spontaneously said by Joseph Quinn to Gaten Matarazzo’s Dustin. Meanwhile, actor Caleb McLaughlin also improvised his character Lucas Sinclair’s cry for help during a tense moment in the show.

“I love you, man” was improvised by Joe pic.twitter.com/z5gYyl18KF