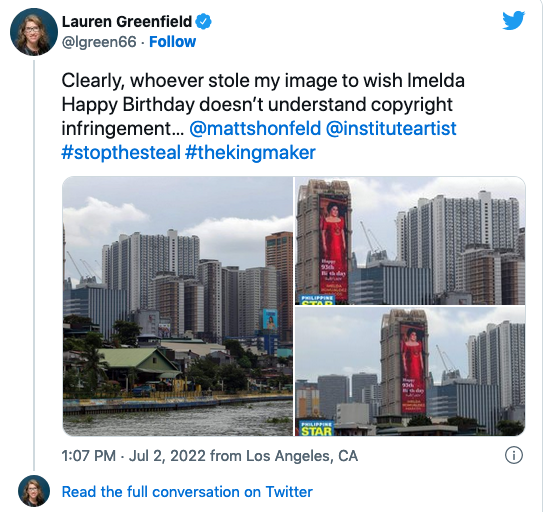 MANILA, Philippines — The director of “The Kingmaker” called out an advertising agency for using without permission an image of former first lady Imelda Marcos that was used to promote her documentary.

According to a photo by the Philippine Star, the image of the former first lady appeared in an electronic billboard located along JP Rizal Avenue in Makati City. The image was accompanied by a “Happy 93th [sic] Birthday,” greeting.

“I have just been notified by friends in the Philippines that my photograph of Imelda Marcos from THE KINGMAKER has been used without permission on a massive billboard owned by a company called Digital Out Of Home PH owned by a Mr. Alvin Carranza, a known Marcos apologist,” Greenfield said.

The American filmmaker said she has already reached out to Carranza via Facebook to take down the image at once.