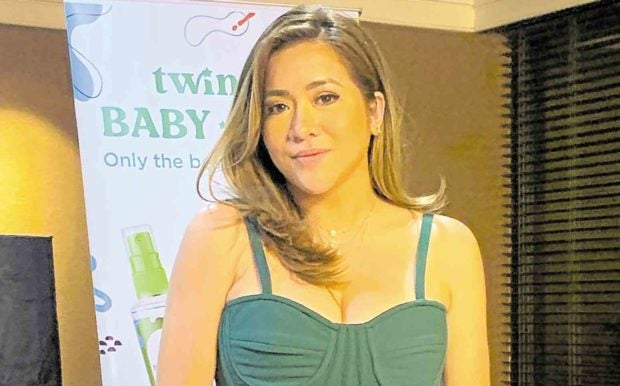 Singer-actress Angeline Quinto admits to feeling more vulnerable to bashers now that she is a new mom.

“Before having a baby, my fears were mostly related to Mama Bob (her late adoptive mother Sylvia). I never really had fears for myself. Now that I have my baby, it’s all about what I can and cannot do for him. Just like most celebrity moms, I don’t care much about the negative comments of people about me, but when they start talking about my family, that’s a different story,” the 32-year-old told Inquirer Entertainment.

Angeline began being active as a vlogger when the pandemic hit in 2020. It was through her channel that she announced her pregnancy, the identity of the father of her child, and shared the elaborate gender reveal party. It was also via her vlog that she got to encounter haters.

Angeline told Inquirer Entertainment how she would react to most of them. “My entire pregnancy journey was documented on my vlog. I shared everything there, even up to the time I gave birth to Sylvio (in April). While doing this, I also prepared myself emotionally for the bashers. While I try my best to ignore them, I noticed that there would come a point when I would feel offended by the really rude comments. As a mom, my instinct was to fight for my child. I’m just lucky that I have a partner (Nonrev Daquina) who would constantly remind me to keep my cool. That’s what I’ve been trying to do ever since,” she declared.

Throughout her pregnancy, she would lean on several people for help and sought their advice, among them fellow singers Regine Velasquez and Zsa Zsa Padilla.

“During my pregnancy, there were a lot of things that I didn’t understand about my body and my emotions—they were constantly changing. I would ask my mommy friends about these things, especially when I was about to give birth,” she recalled. “Miss Reg told me to make sure to pack not just the baby’s things, but also mine, one month before my scheduled delivery. She said I should not be like her—she had everything packed for Nate, but not her personal stuff. So she had nothing to wear at the hospital.

“On a more serious note, Miss Zsa Zsa reminded me that my life would totally change once I see my child. This proved to be true. I was still feeling groggy when I first heard Sylvio’s voice, but I told myself, ‘This is it! This is the start of a new chapter in my life. I’m now a mom!’”

While she is focused on taking care of Sylvio, Angeline said she is determined to continue her singing career. “Like what I’ve always said, I love singing and performing. I consider the opportunities to act in front of the camera as a bonus. I would still accept offers if my schedule permits. This was why I felt sad when, only recently, I had to turn down offers to do shows abroad. I love performing so much that I could still see myself singing even when I’m old. I want to keep performing like Miss Pilita Corales in the future,” she said.

Angeline also said she hoped that her celebrity status would help her reach more people and enable her to share with them the highlights of her life journey. She admitted that there were times when she almost gave up on trying to achieve her dreams.

“I would recall that point in my life whenever I get the chance. This is because my story is able to inspire other people, give them strength to carry on with their own journey. I’m happy that I’m also able to motivate people through my music,” said Angeline. “It’s true that I would receive a lot of messages on Instagram, most of them sent by OFWs (overseas Filipino workers). There’s this message from someone who’s been working in Dubai for a long time. She said that whenever she and her Filipino friends there would feel homesick, they would listen to my song ‘Patuloy ang Pangarap.’ This has become the theme song of their group. Later, when Sylvio is old enough, I will tell him this story.”

Angeline said she and Nonrev are hands-on as parents. She also said she already noticed that Sylvio, who is only a month and 2 weeks old as of press time, would cry with a specific tone. “When he cries he makes a high-pitched sound. This is unlike other babies I’ve known who would start in a low voice that would then turn into a wail. I’m guessing that it helped that when he was still in my womb, I would let him hear music. I think this boy will grow up to be a belter like Eric Santos,” she quipped.

Angeline added that even while she was still carrying Sylvio in her womb, she was already researching baby products that would be safe for him to use. This prompted her to launch Twinqle, an innovative skincare line for moms and their babies. “Even on social media, I would get questions like ‘What stuff do you use on your skin to avoid getting stretch marks?’ I thought, why don’t I work on something to help them with their skin problems and other concerns about their babies?” asked Angeline.

“Even when I was still in grade school, I already had a knack of selling products. I would buy kisses (scented beads) and stationeries on Espana Boulevard and sell them at a higher price in school. I feel that this is my path, other than being a singer. This has helped me a lot, especially when there was no opportunity to perform during the pandemic,” said Angeline when asked how she feels now that she is already the CEO of her own business.

At the launch, Angeline sang “Nag Iisa Lang,” which she dedicated to Sylvio. INQ