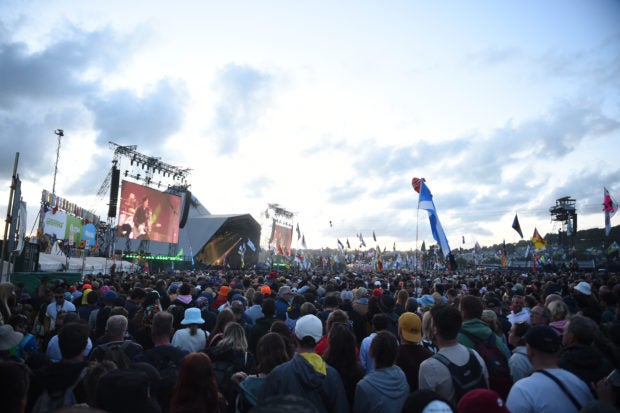 United States rapper Kendrick Lamar will bring the curtain down on Britain’s Glastonbury Festival on Sunday (Monday in Philippine time), after Paul McCartney ran through a set of Beatles classics, helped out by Bruce Springsteen and Dave Grohl.

McCartney, who turned 80 last week, on Saturday became the oldest main stage headliner of all time, and was joined by Springsteen for “I Wanna Be Your Man,” while former Nirvana man Grohl came on for “I Saw Her Standing There.”

The 100,000 strong crowd at the dairy farm in south west England serenaded McCartney onto the stage with “Happy Birthday,” and were treated to timeless classics including “Can’t Buy Me Love,” “Love Me Do,” “Blackbird,” “Helter Skelter,” “Let It Be” and “Hey Jude.”

The Sunday Telegraph called it “one of the most thrilling, uplifting, banger-filled” Glastonbury performances, giving it five stars.

“A huge crowd of all ages spread in front of the mystically glowing Pyramid stage. Flags waved, flares blazed, voices were raised in song. The world hasn’t exactly been a vision of peace and love lately, but here was the Fab One to put things right,” it said.

In a four-star review, the Observer said that “the occasional lulls” in the first part of the three-hour set “rather potentiates what happens afterwards, when McCartney starts to pull out all the stops.”

“There’s something incredibly charming about seeing the puppyish delight on the face of Springsteen… as he and McCartney trade lines,” it added.

The singer-songwriter also performed a duet with his late musical partner John Lennon, whose image was projected on a giant screen, on a version of “I Got A Feeling.”

The coronavirus pandemic forced organizers to cancel the last two years’ events, and those going this year battled three days of major rail strikes across the country to get there.

Meanwhile, Ukraine’s President Volodymyr Zelensky put in an appearance on Friday, urging revelers by big screen to band together to try to stop the conflict with Russia.

Dairy farmer Michael Eavis first organized the festival in 1970, the day after Jimi Hendrix died, and fans who came to see acts including Marc Bolan and Al Stewart paid £1 each for entry and received free milk from the farm.

The festival was held intermittently in the 1970s and it wasn’t until the 1990s that it really began to acquire its current status.

Glastonbury was due to celebrate its 50th anniversary in 2020, but those plans were put on hold by the pandemic.

Integral to the festival’s development was the late Arabella Churchill, granddaughter of Winston Churchill, who set up and then ran the Theatre and Circus fields.

As a result, the festival developed a diverse reputation and the 900-acre (360-hectare) site now encompasses various thematic areas. AP/JB