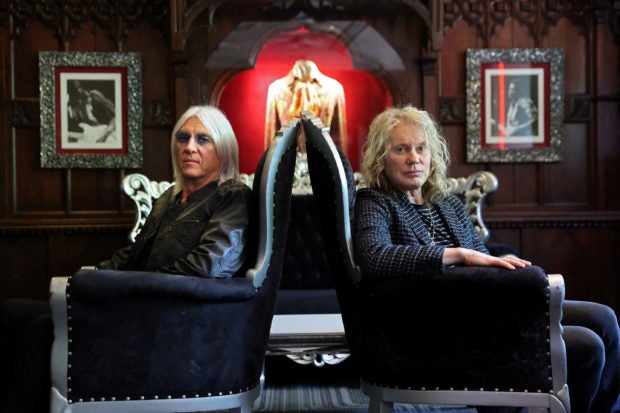 Def Leppard have been rocking out for 45 years and have more than 100 million album sales under their belts, but they are adamant that no farewell tours are on the horizon.

The band from Sheffield, England were one of the biggest players in the big-hair, big-riffs heyday of 1980s stadium rock.

Their back-to-back albums “Pyromania” and “Hysteria” both sold more than 10 million copies in the United States alone, one of only five rock bands in history to do so.

Now in their sixties, they have certainly earned their stripes in rock lore: surviving the loss of their guitarist Steve Clark to an overdose in the early 1990s, and drummer Rick Allen carrying on despite losing an arm in a car accident in 1984.

“We always joked that farewell tours are a way of saying that your ticket sales suck. We’re very fortunate that we haven’t had to do that,” singer Joe Elliott told AFP.

“The Scorpions have been on a farewell tour for, like, 14 years, Cher’s been on one for about 20… Sinatra did five of them,” he said with a laugh. “But we’ve never taken any time off. If we were off the road, we were making an album.”

The jovial singer, still rocking the long hair and sporting a pair of blue-tinted sunglasses, knows it can’t last forever. But he sees no reason the band’s journey can’t “stretch until 2035 when we’re the same age as The Rolling Stones are now.”

Def Leppard are back on the road this summer with fellow rock veterans Motley Crue, Poison and Joan Jett.

They have also just released 12th studio album “Diamond Star Halos,” their first in seven years, which they pieced together during the pandemic despite the five members being spread across England, Ireland and the United States.

The new songs see the band try to step away from the “albatross” of Hysteria, said Elliot, experimenting with piano, flamenco guitar and glam rock.

“We’re back to the roots of what got us into music, not back to ourselves,” Elliott said. “On this record we were coming up with ideas that sounded like Bowie or Elton John, or Queen and Zeppelin. All the things that we listened to growing up are leaking in, which it always has, but we didn’t block it this time.”

Elliott says the pandemic, which forced them to put their songs together remotely, was a gift.

“When you put four or five alpha males in one room with new songs it becomes a little competitive. This was psychologically completely different,” he explained. “The pandemic opened our minds. We thought: ‘We’ve got this time, let’s do something creative and put no blocks on anything.'”

The band had no record deal when they began the project (it was ultimately released by Universal) and found that open-ended process liberating.

“For a band that made Hysteria 35 years ago, this is a fantastic statement. Any fans that bought that album — the ones that aren’t dead! — are ready for the next stage of the journey,” Elliott said. “We want to be able to expand our horizons. Nothing is off the table, everything is invited into the party.” JB