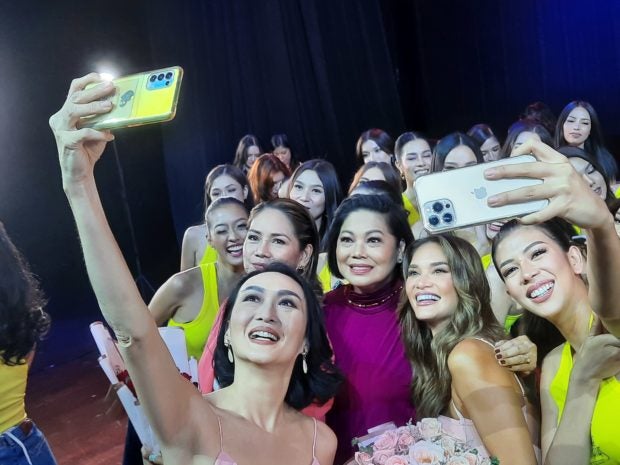 MANILA, Philippines — Beauty pageant candidates always get the opportunity to come face-to-face with the reigning queens, those whose crowns they are aiming for. But seldom do we find them mingling with titleholders from years, even decades, past.

This year’s Binibining Pilipinas pageant gave the contestants a rare chance to not only see queens from decades ago, but also learn from them and be inspired by the stories the former queens themselves have imparted.

The extraordinary meeting happened at the New Frontier Theater at the Araneta City in Quezon City on June 13 during a video shoot with 2015 Miss Universe Pia Wurtzbach and the 2022 Bb. Pilipinas candidates.

Bb. Pilipinas invited Wurtzbach, who joined the national pageant three years in a row before capturing her crown, to impart her wisdom to this year’s crop of aspirants. But if in the previous editions the former queens shared tips on how to snag a crown, or be their best selves for the competition, the actress-turned-beauty-queen tackled building friendships in a competitive arena such as pageants, and fostering relationships akin to sisterhood.

The three are part of an even bigger group of former Binibining Pilipinas titleholders who have formed a close-knit friendship, all former wards of beauty queen maker and renowned fashion designer Renee Salud.

Laughter was shared and tears were shed as the four Binibining Pilipinas queens talked about their triumphs and heartaches, and being there for one another through thick and thin.

Highlights of the meet up between the 2022 Bb. Pilipinas candidates and former queens will be part of the coronation night next month. Image: Philippine Daily Inquirer/Armin P. Adina

Some of the candidates also got the chance to ask questions from the former queens.

Highlights of the occasion will become part of the grand coronation night of the 2022 Bb. Pilipinas pageant scheduled next month.

And as an added treat to pageant afficionados, ABS-CBN will release the full video of the queens’ meet up with the delegates online after the coronation night.