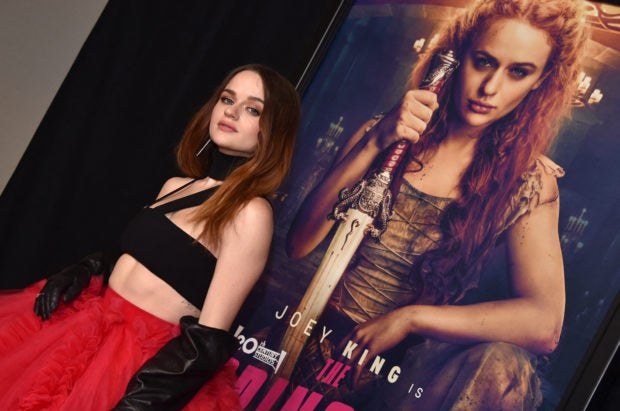 For a Disney film called “The Princess,” Joey King’s new movie has a lot of R-rated violence, death and even the odd use of the word “bitch.”

But from the moment her tough-as-nails royal heroine stabs a hairpin into a henchman’s eyeball, it is clear 20th Century Studios’ “The Princess” — out July 1 on streaming platforms — is not your typical family-friendly fairytale.

“I mean it wouldn’t be fun if it wasn’t violent, you know!” King told Agence France-Presse on the red carpet at Thursday’s premiere in Hollywood. “I was constantly telling our producer Toby [Jaffe], I was, like, ‘we need more blood on the dress!'”

Described as “Rapunzel” meets action-thriller “The Raid,” the live-action film begins with King’s sleeping princess, clad in a wedding dress, awakening as a prisoner at the top of a dizzying tower.

A series of highly stylized, female-led fight scenes unfurl as she bids to escape from nemeses including former Bond girl Olga Kurylenko (“Quantum of Solace”).

The action is more reminiscent of “Game of Thrones” than “Sleeping Beauty” or “Snow White.”

“The idea of doing a princess movie with Disney that completely goes against anything they’ve ever done is just perfect,” said Ben Lustig, who co-wrote the film.

His original premise was “how can we take the trope of that princess stuck at the top of the tower, that everybody knows, and then flip it on its head?”

Lustig and Jake Thornton’s script was bought by 20th Century Studios, a Disney subsidiary, and the film is released on Hulu in the United States and Disney+ internationally.

Among the film’s producers is Derek Kolstad, who created the “John Wick” action films starring Keanu Reeves as a violent hitman.

“The joke at the beginning is ‘what if Princess Peach saved herself, didn’t need Mario, and just beat the crap out of Bowser?'” said Kolstad.

“I don’t think John (Wick) would cross her!” he joked.

The film takes the recent trend of feisty, fiercely independent Disney princesses a few steps further, but it “didn’t want to go too soap-boxy,” with the emphasis on fun, said Kolstad.

The role is also a departure for 22-year-old King, star of Netflix’s smash teen film series “The Kissing Booth,” who will soon be seen opposite Brad Pitt in action-comedy “Bullet Train.”

“It is so exhausting, it is so hard on your body,” said King, of the film’s many fight sequences. “But there’s something about it that is so fulfilling and rewarding — I absolutely fell in love with action.”

The film was directed by Le-Van Kiet, a Vietnamese-born filmmaker whose 2019 martial arts thriller “Furie” became his birth country’s highest-grossing film of all time.

“One of the first things I wanted to do was have her do a Wushu kick,” he said. “Crazy ideas, but the studio went with it. And I’m glad they did!”

As well as acquiring a new set of battle skills, King said the movie has fulfilled a dream of hers.