Breaking the K-pop taboo: How BTS brings together a global community 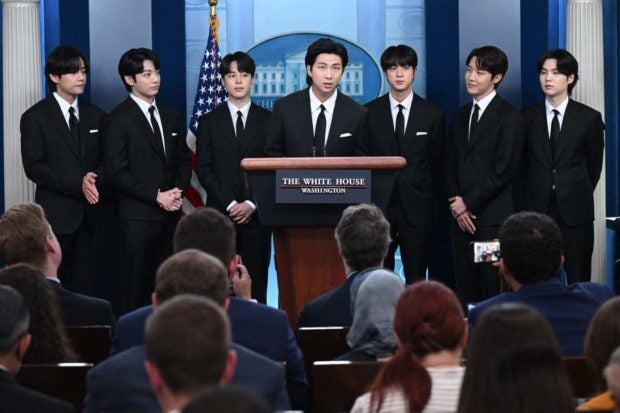 BTS speaks at the White House to discuss Asian inclusion and representation and address anti-Asian hate crimes and discrimination on May 31. | PHOTO: AFP-Yonhap

SEOUL — Music is a tool for singers to spread social messages, with Western singers often using their platforms to speak up on social issues. But K-pop singers often shy away from subjects that might be controversial, choosing to stay silent on social problems rather than touching on matters that might spark media conversations.

But throughout the years, BTS, as one of the world‘s most influential figures, has a long history of advocating for social change.

Last month, the septet visited the White House to discuss Asian representation and address the rise in anti-Asian hate crimes with US President Joe Biden, taking the opportunity to speak out and bring awareness to the issue.

Suga gave a short statement during the event, “It’s not wrong to be different. I think equality begins when we open up and embrace all of our differences.”

Culture critic Jang Duk-hyun said BTS‘ visit to the White House showed how well the band uses “star power” for good and how they can bring many different types of people together.

“BTS is not just an artist from South Korea but represents the whole Asian community. As anti-Asian hate crimes are soaring, BTS is a group that can draw attention to issues using its influence and music,” Jang told The Korea Herald.

BTS is also more active on social media when compared to other K-pop acts. The band often uses its platform to spread messages to millions of fans around the world, which is why it can be seen as “a leader of global issues,” he added.

The band has also used its influence to enact positive news, particularly through their Army, the official name given to fans of BTS, who have worked with the band to help them spread their message.

BTS fans gave their support to the BLM movement, as nationwide protests against racial inequality and police brutality were prominent in the US.

And as the issue gathered momentum, BTS fans worked on various platforms to help raise awareness of unequal treatment and to help create an anti-racism community.

Many fans posted words of encouragement, and one fan wrote, “Speak up for black Armys or POC when you see things like this happening. Help be the solution, not the problem.”

BTS has also been expanding its influence as a global youth ambassador. The band gave a speech at the 76th United Nations Generation Assembly, attending the event as the “special presidential envoy of future generations and culture.”

BTS teamed up with UNICEF in 2017 as part of its “Love Myself” anti-violence campaign to shed light on violence against teenagers and children.

It also made a rare statement of solidarity with the Black community condemning the death of George Floyd.

“We stand against racial discrimination. We condemn violence. You, I and we all have the right to be respected. We will stand together,” the group wrote on Twitter days after a police officer brutally killed George Floyd.

Last year, the band opened up about its experience with discrimination amid the escalating hostility toward Asian Americans during the pandemic.

Big Hit Music, the K-pop juggernaut’s agency, was also an outlier. While many in the industry chose silence on the issue, the company stood with BTS in support of the anti-racism movement and donated $1 million to Black Lives Matter. 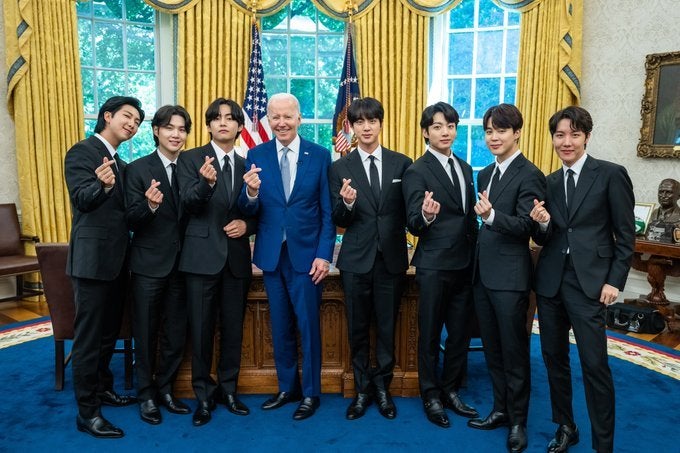 BTS poses with US President at the White House on May 31. | PHOTO: Big Hit Music

K-pop has had a long history of staying out of social and political issues, mainly because of the fear that it would affect business. But since its debut in 2013, BTS has been slowly changing that idea.

BTS broke K-pop‘s taboos by speaking out on topics that could prove controversial. The seven-piece act has been speaking their minds through music by talking about mental health, LGBTQ rights and the pressure to succeed — all of which are difficult subjects to bring up in Korea.

“Tomorrow,” a track from 2014’s “Skool Luv Affair” album, expressed the hardship youngsters face today. Suga‘s 2016 mixtape “So Far Way” touches on the pain, insecurity and loneliness he felt while seeing others chasing after their dreams.

The septet has also openly discussed same-sex relationships, something that could have damaged them in their early careers. The group’s leader RM spoke of his admiration for the Macklemore and Ryan Lewis mega-hit “Same Love,” a track about the LGBTQ community.

Music critic Lim Jin-mo said BTS became an international icon through its “youth trilogy” — an album that touches on the emotions and uncertainties of youngsters in today‘s society.

He added that the South Korea-born band has become a symbolic figure through its music, making it attractive for the UN and the White House to work with them to raise awareness about social issues.

“Most K-pop songs are about love, but BTS is different. The band puts their beliefs and convictions into their music, which is why people resonate with it so much. This paved the way for BTS to become a symbol of diversity.”

Meanwhile, BTS announced Tuesday that it would go on temporary hiatus while members pursue solo projects.

Big Hit Music said each bandmate would be “taking the time to mature, which will help the band to have prolonged success in the future.”

J-Hope will be the first member to go solo. Other members’ upcoming solo projects and previously released mixtapes will be available on music platforms in the future.

Are K-pop singers allowed to date?

Will a presidential election mark the end of S. Korea’s tattoo taboos?

Why we give space to ‘Hallyu’ fans