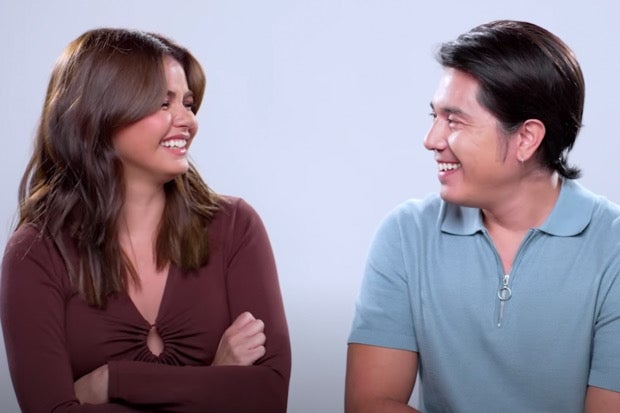 Janine Gutierrez got candid about her relationship with onscreen love team partner, actor Paulo Avelino, and confessed that she had imagined him as her boyfriend.

The actress disclosed this after she was asked by Avelino if she ever “imagined being in a relationship” with him during a lie detector drinking game, as seen on RecCreate’s YouTube channel yesterday, June 13. The questions that the actors asked each other were given by the organizers.

“Yes, of course. Syempre nag-shooting tayo (When we did our shoot),” Gutierrez answered, but she was “shocked” by the lie detector device apparently implying that she lied.

“Sana nagsinungaling na lang ako [para] hindi ako napahiya,” she quipped. (I should have just lied to save myself from embarrassment.)

Gutierrez then asserted that she answered the question honestly, explaining that it is natural for actors to envision the same towards fellow actors they are working with.

Avelino, for his part, admitted that he already knew that he and Gutierrez will be “close” to each other right when they first met.

“It’s just something you know when you meet each other,” he stated.

Gutierrez and Avelino first paired up in ABS-CBN’s romantic-comedy series “Marry Me, Marry You” where they starred alongside Edu Manzano and Cherry Pie Picache, among others. Though the two are yet to confirm the real score between them, fans speculate that they are getting closer to each other as they were frequently spotted together, with their New York trip being the recent.

Meanwhile, Gutierrez and Avelino are set to star in their upcoming film “Ngayon Kaya” which will premiere on June 22. JB