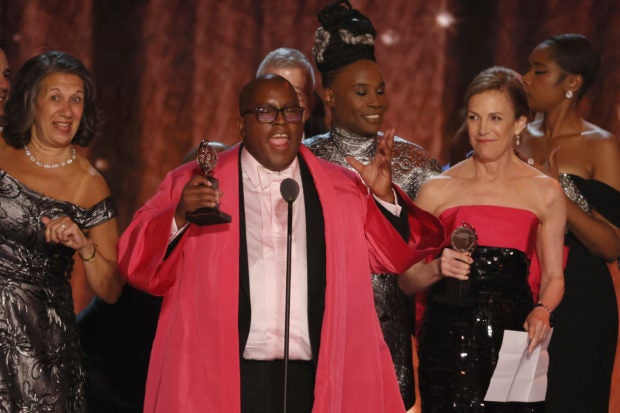 Michael R. Jackson speaks as the award for Best Musical is given to “A Strange Loop” at the 75th Annual Tony Awards in New York City, U.S., June 12, 2022. Image: Reuters/Brendan McDermid

“A Strange Loop,” the story of a Black gay man and his mental struggles as a playwright, won the Tony award on Sunday for best new musical as Broadway honored its first season since the long pandemic shutdown.

“The Lehman Trilogy,” about the rise and fall of investment firm Lehman Brothers, took the best new play honor at a live ceremony held at Radio City Music Hall in New York.

“Strange Loop” triumphed over “MJ,” a crowd-pleasing musical about Michael Jackson. Star Myles Frost won best actor in a musical for playing the King of Pop.

Being on stage to accept the Tony felt like a “miracle,” said Ben Power, the writer of “Lehman Trilogy,” after COVID-19 halted preview shows of the play for 577 days.

“In New York, even after everything, even after today, anything is possible,” Power said, adding that the play had been written as “a hymn to the city of New York.”

“Strange Loop” writer Michael R. Jackson based the musical on his own internal doubts as well as external obstacles as he tried to pen a Broadway show.

“I just wanted to create a little bit of a life raft for myself as a Black gay man,” he said.

Best actor winner Frost addressed his mother in the audience as he accepted his award for “MJ.”

“Mom, I made it,” he said, and thanked her for bringing him up to be a “strong Black man.”

For best revival of a musical, voters honored “Company,” the final project backed by composer and theater legend Stephen Sondheim, who died in November.

The new “Company” reverses the gender roles of the original, which centered on a single man considering his life choices as he turned 35. Producer Chris Harper thanked Sondheim “for letting us re-imagine the classic musical.”

“Hamilton” creator Lin-Manuel Miranda introduced a tribute to Sondheim, saluting his “immortal” songs and lyrics and his mentorship of younger artists, including Miranda himself.

The three-hour telecast of the awards event featured a slew of performances from nominated shows, to help entice audiences back to theaters.

Hugh Jackman sang “76 Trombones” from “The Music Man” while Mare Winningham performed Bob Dylan’s “Like a Rolling Stone,” featured in the musical “Girl from the North Country.”

Michael Jackson’s children, Prince and Paris, introduced a rendition of “Smooth Criminal” by the “MJ” cast.

Patti LuPone won her third Tony award, for a supporting role in “Company.” She thanked “all of the COVID safety people” for making Broadway’s return possible. In the audience were 150 COVID-19 safety managers who had kept shows running.

“I give thanks to all of the nameless ancestors who have suffered. This show gives power to them,” Kalukango said.

Sunday’s Tonys were the 75th edition and the ceremony honored some of Broadway’s biggest hits over the decades. Host Ariana DeBose opened it with a medley honoring shows from “Cabaret” to “Wicked,” “The Wiz” and “Hamilton.”

She and others at the ceremony welcomed the industry’s efforts to diversify the stories and casts on stage.

“I’m so proud that the theater is becoming more reflective of the community that adores it,” said DeBose, the Oscar-winning Afro-Latina star of “West Side Story.”

Best play revival went to “Take Me Out,” the story of a gay baseball player.

Deirde O’Connell, who won the Tony for lead actress in a play for “Dana H,” urged aspiring writers to “make the weird art.” JB

Read Next
Carla Abellana has this wish for her birthday: ‘To be happy’
EDITORS' PICK
House energy committee chair Arroyo bats for cheap electricity
The Best Tech Gifts For The 2022 Holidays
Noche Buena items price hikes are justified and can’t be controlled – DTI official
COA says over 4,000 pending audit backlogs will be resolved in 2 years
The vivo Y16 makes the season of giving more thoughtful for the whole family
DBM releases P5.2 billion for 9.8 million beneficiaries of targeted cash transfer
MOST READ
Claudine Barretto asks for prayers as she undergoes thigh surgery
Jennifer Lopez recounts 2004 split with Ben Affleck: ‘I felt like I was gonna die’
LOOK: Alyssa Gibbs finally marries fiancé five years after engagement
Trader duped by seniors in ‘Marcos gold’ investment
Don't miss out on the latest news and information.