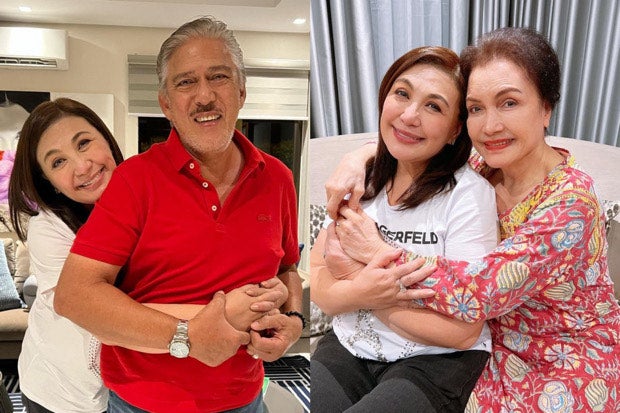 Sharon Cuneta reunited with Sen. Vicente “Tito” Sotto III, his wife Helen Gamboa and their children, as they appear to have mended the rift caused by politics between their families.

It can be recalled that Cuneta’s husband, Sen. Francis “Kiko” Pangilinan, and Tito Sotto, with whom the actress is related through her mother’s sister Gamboa, both vied for the vice presidency in the May 2022 elections. While Sotto stated that it did not bother him, he disclosed that it was a “big deal” for his family as they have “different perspectives.”

The Megastar showed herself in an embrace with each of them, through a series of photos on her Instagram page yesterday, June 11. Aside from Tito and Gamboa who Cuneta called “daddy” and “mama,” Cuneta also met with her cousins Diorella, Romina and Ciara.

Ciara also showed snaps from their meeting via her Instagram page, while quoting a bible verse saying, “Blessed are the peacemakers, for they will be called children of God.”

In October last year, Cuneta asked fans for prayers while admitting that she has a “heavy heart” as her family goes through a “game called politics.”

Meanwhile, Sotto and Pangilinan lost their bid for the vice presidency to the daughter of outgoing President Rodrigo Duterte, Sara Duterte-Carpio, who was proclaimed as the country’s 15th Vice President. JB

Sharon Cuneta receives pendant with Fanny Serrano’s ashes: ‘This will forever be precious to me’