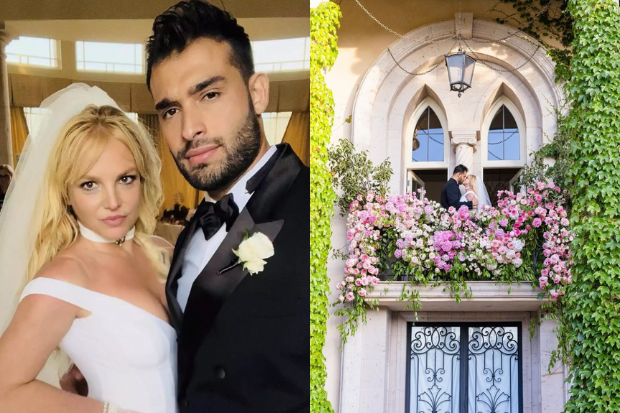 Britney Spears and her longtime boyfriend Sam Asghari finally tied the knot, and gave fans a glimpse of their special day.

The couple exchanged vows at their home in Los Angeles, California, as per Spears’ Instagram page today, June 11. The pop star also indicated that she got married last Thursday, June 9, by writing, “06-09-2022.”

Spears looked stunning in a white silk cady dress with a portrait neckline by Donatella Versace, while Asghari donned a black suit, also by Versace. They can also be seen kissing at their balcony, which was decked with various white and pink flowers, as a carriage awaits outside their house.

“WE DID IT! WE GOT MARRIED! [Geez]! It was the most spectacular day!” Spears gushed, at the same time admitting that she was nervous the morning before the ceremony.

“I had a panic attack and then got it together… the crew who created our home into literally a dream castle were fantastic! The ceremony was a dream and the party was even better! So many incredible people came to our wedding and I’m still in shock,” she said.

Among the guests who came to the wedding were American celebrities Madonna, Paris Hilton, Drew Barrymore and Selena Gomez.

For his part, Asghari showed moments from the wedding and a black-and-white photo of himself during the ceremony as he sent king and queen emoji to fans via his Instagram page, also today.

Spears and Asghari met in 2016 when they both starred in a music video for the pop star’s song “Slumber Party.” They then announced their engagement in September last year.

The “Toxic” singer had been married twice before. She wed her friend Jason Alexander in 2004, but their union was annulled after a few days.

Later that year, she tied the knot with dancer Kevin Federline, with whom she has two teenage sons. Spears and Federline’s marriage ended in divorce in 2007.  /ra