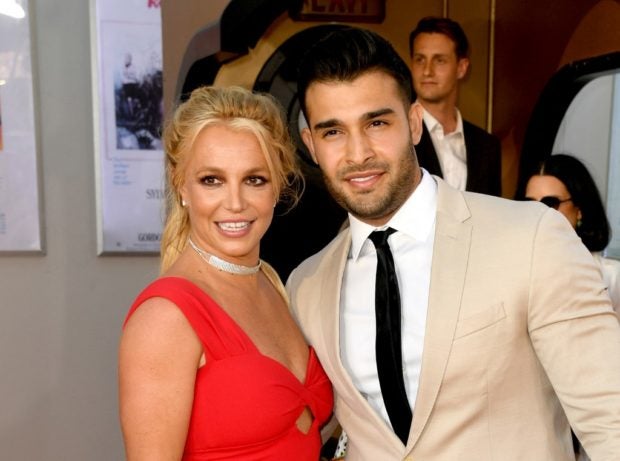 Britney Spears and Sam Asghari arrive at the premiere of Sony Pictures’ “Once upon a Time…in Hollywood” at the Chinese Theatre on July 22, 2019, in Hollywood, California. Image: Getty Images/Kevin Winter via AFP

Spears and her partner Sam Asghari were readying to wed at her luxury pad near Los Angeles when the proceedings were interrupted, Variety and other trade media said.

Jason Alexander, a childhood friend to whom the 40-year-old singer was very briefly married in 2004, crashed the sun-soaked event, sparking a police response.

Alexander apparently live streamed his invasion on Instagram, with footage showing him telling a security guard he had been invited.

“Where’s Britney?” he can be heard saying.

Later as he walks into a pink tent festooned with flowers, he identifies himself and says: “So here’s the inside scoop, guys, on the bullshit wedding.”

Entertainment website TMZ said a physical confrontation ensued and the police were called.

Ventura County Sheriff’s Office said officers were called to investigate reports of someone trespassing and found that Alexander had an outstanding warrant against him from another jurisdiction, so they arrested him, Variety reported.

AFP was not immediately able to confirm the report.

Spears’ wedding to Asghari was not widely trailed, with news of the nuptials appearing on specialist publications only hours earlier.

The couple said last month that the surprise pregnancy they had announced only weeks before had ended in a miscarriage.

That news came five months after a Los Angeles judge dissolved a conservatorship long overseen by Spears’ father—an arrangement the singer said had prevented her from having a contraceptive IUD removed despite her desire for more children.

She is already mother to two teen sons, Sean and Jayden, with her ex-husband Kevin Federline.

Asghari and Spears met in 2016 when they co-starred in a music video for her single “Slumber Party.”

After announcing their engagement late last year, Spears has since started referring to her 28-year-old partner as her “husband.”

At the time Spears announced she was pregnant, Asghari said in a separate Instagram post that “fatherhood is something I have always looked forward to and I don’t take lightly. It is the most important job I will ever do.” DC