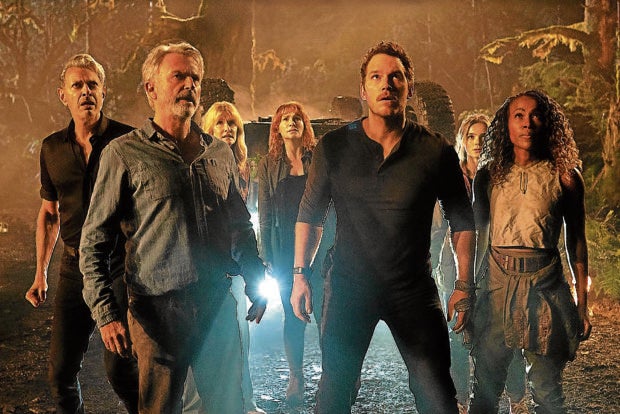 Run, don’t walk—that is, to the biggest screen you can watch “Jurassic World Dominion” on. The slam-bang conclusion of director-producer Steven Spielberg and author Michael Crichton’s two-trilogy dinosaur film franchise, which has an 88-percent fresh rating on Rotten Tomatoes, brings the story that began in Spielberg’s 1993 movie milestone “Jurassic Park” (92 percent on Rotten Tomatoes) to a satisfying close.

“Dominion,” which opens in Philippine cinemas today, expands “Jurassic Park’s” cautionary themes on man-versus-nature and the unmitigated dangers of technology. Four years after Isla Nublar was destroyed, the dinosaurs have been taken off the island and released out into the wider world.

The production’s fast-paced action is made more viewable not just by the scale and enormity of its production elements—it boasts 112 sets—but also by the 27 individual dinosaurs created for the film, 10 of which had never been seen in previous “Jurassic” films! So Blue, her 4-foot baby raptor Beta, and the scary T. rex won’t be the only ravenous creatures chewing up the scenery this time around.

When we watched the film alone, the ones that quickly stood out for us included the Giganotosaurus (the largest terrestrial carnivore), the savage Atrociraptors, the crocodile-like Dimetrodon and the venomous serpentine Dilophosaurus.

At a recent roundtable interview with director Colin Trevorrow, who also directed 2018’s “Jurassic World,” we asked the filmmaker how they chose the type of dinosaurs to feature in “Dominion.”

“There were some dinosaurs that we held back because we wanted to make sure that there was a narrative reason why they would exist,” he said. “So we didn’t put the feathered dinosaurs… the Therizinasaurs, the Pyroraptors… in the earlier films because it had been clear that, in ‘Jurassic Park,’ Dr. Wu’s dinosaurs had frog DNA that was inserted into the genome that made them look slightly different.

“With [the bioengineering company] Biosyn around, we felt like this was an opportunity for brilliant scientists to push the technology forward, discover ways to be more accurate, and to show us dinosaurs as they existed. I wanted there to be a true motivation for it, not just a bunch of writers coming up with cool dinosaurs to put in the movie.” 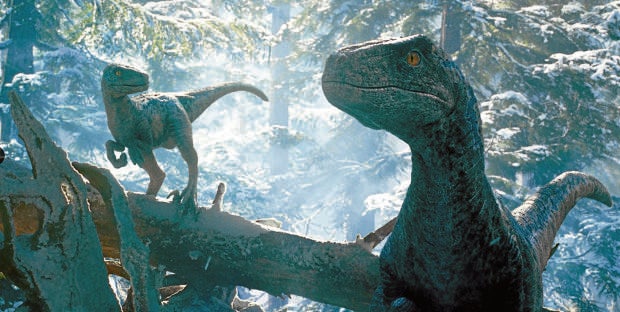 Colin astutely explained that the task at hand wasn’t just about creating creatures that were compelling to watch on the big screen. The fact that he had to follow in the footsteps of the franchise’s legendary first director, Steven Spielberg, was a tough row to hoe.

Asked what Spielberg’s marching orders to him were when he was first asked to helm “Jurassic World,” the 45-year-old director shared, “There were very few marching orders from Steven. When I was offered ‘Jurassic World,’ he was interested in the idea of raptors that could be commanded and weaponized in a certain way. So that was something I’ve tried to honor through all the films. I wanted to make sure that he could see this thing that he was imagining.

“We also agreed that there should be an open park in that film and, at that point, it was also very important that there would be kids in it—although Isabelle is no longer a ‘just a kid’ in ‘Dominion.’

“But I really appreciate how much room Steven has given me and my cowriters to create a set of stories that hopefully honor what he and Michael Crichton did, and give the situations that happened in those films more purpose now than we thought they did. That they’d be more narratively valuable to us now when we look at all of these movies together.”

That’s all to the good. But to drown out all that blockbuster-channeling spectacle and “noise,” the film’s more intimate elements are bolstered even more by the return of “Jurassic Park’s” iconic characters, Dr. Alan Grant (Sam Neill) and Dr. Ellie Sattler (Laura Dern), who reunite with Dr. Ian Malcolm (Jeff Goldblum) and Dr. Henry Wu (BD Wong) one last time.

“It’s a great honor and a great challenge,” quipped Colin when asked what it felt like to bring together two generations of the film series’ cast members. “I’ve been a fan of these actors since I was very young. So, to make sure that I don’t just treat them like a fan… that I treat them like a filmmaker and a storyteller who has to figure out exactly why they’re in this movie, and what more do we have to say about them, that felt like the most important thing. Otherwise, I would just be a superfan who’s putting them up onscreen just for the sake of it.”

When Chris and Bryce were asked in a separate press conference to describe how it was working with the original lead stars of “Jurassic Park,” Bryce recalled, “Before we shot ‘Jurassic World Dominion,’ Laura had just won an Oscar (as best supporting actress for 2019’s ‘Marriage Story’). Let’s set ‘Jurassic Park’ to the side and say for a second that they weren’t in it.

“They’ve all done so many projects that have had such a huge impact on culture. Plus, they’re incredibly warm, sweet, sincere and beautiful human beings. It was incredible getting to work with them! On top of that, we got to work with their characters, who we all love so much. I’m like, ‘Oh, my God—this is Dr. Ian Malcolm! You know what I mean?”

Interjecting with a joke, Chris said, “And then, you realize that Sam is not American! This is Alan Grant, man—he’s not from New Zealand. This is crazy (laughs)!”

Chris did get serious when asked how he felt portraying Owen and Claire now as parents of Maisie.

“It’s a great natural next step in the evolution of these characters,” the actor explained. “One thing that’s been very important to both of us is that if we were going to keep reprising these roles, we shouldn’t just repeat the same beat so that their ‘will they or won’t they’ chemistry will never become hackneyed. That has rolled into something entirely different for our third film. 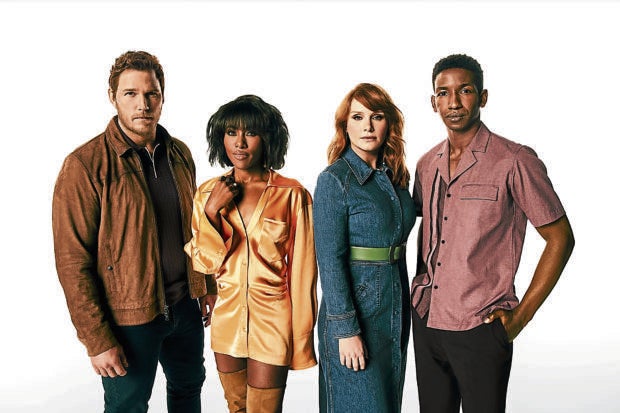 “This time, the ‘will they or won’t they’ sexual tension is left for Sam Neill and Laura Dern to mine. And they light up the screen with their red-hot chemistry, which is so elegantly sentimental and beautiful.

“Our characters are parents now, and we have a reason beyond just our passion and love for one another, and that’s to be devoted to the union of our partnership for the betterment of a young child. Those are high stakes for us to carry through the story.”

Bryce added, “You met my character when Claire was much more selfish. At the time, Owen and Claire were the center of their own worlds, but now they’re parents, which is one of the most selfless things that you can do as a human being. So, it’s definitely been a satisfying, enriching and layered arc for both of us.”

“I was 12 years old when I watched ‘Jurassic Park’ in the theater on opening weekend, and Chris was 13,” Bryce stated. “So we were very much at similar stages in our development as people. Originally, I wasn’t allowed to watch it, but my dad (director Ron Howard) and mom went on opening night, and they came back saying, ‘This movie has changed cinema forever. You have to see this in the theater!’

“So, on that Saturday, I went and saw the movie. And I actually got emotional because, at that point, I had been on a lot of my father’s movie sets, and had naturally gravitated toward the various filmmaking innovations that were possible.

“Like, I remember when I was 5, when my dad was doing ‘Willow.’ They used the morphing technology for the first time on that film, and I was blown away by that. So, watching ‘Jurassic Park’ always stayed with me.”

Of the six films in the “Jurassic” franchise, which is their favorite movie?

“We get to see where the legacy cast members are 30 years later—it’s truly special to revisit fictional characters from 30 years ago, then bring them back into this world in a fully organic and meaningful way, and not just as glorified cameos. ‘Star Wars’ and ‘The Avengers’ have done something similar—and now we’re doing it. And we’re seeing these characters age like fine wine!” INQ