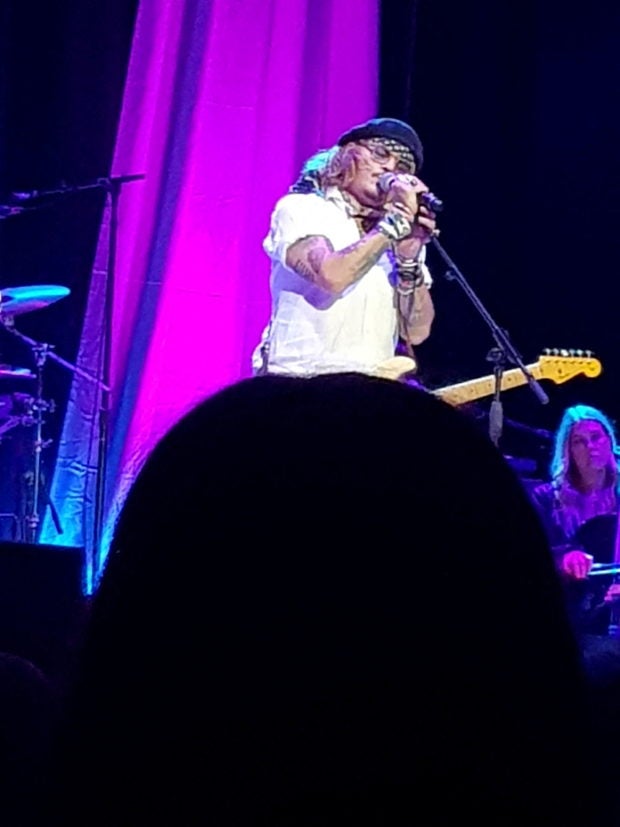 Actor Johnny Depp joins musician Jeff Beck (not pictured) on stage during a concert, in Sheffield, Britain May 29, 2022 in this picture obtained by Reuters from social media on May 30, 2022. P. Donovan/via REUTERS

LONDON — Hollywood star Johnny Depp, awaiting a ruling in a U.S. defamation case involving his ex-wife and actor Amber Heard, made an unscheduled appearance at London’s Royal Albert Hall on Monday during a rock concert, his second in as many nights.

Depp appeared with English guitarist Jeff Beck to perform a series of music covers, including John Lennon’s “Isolation”, a track they collaborated on and released in 2020, in the northern English city of Sheffield on Sunday, surprising the crowd.

On Monday, he showed up again onstage with Beck, at the iconic Royal Albert Hall, again playing “Isolation” among other tracks.

Jurors in Virginia deliberating the defamation claims from both “Pirates of the Caribbean” star Depp and Heard adjourned on Friday without returning a verdict.

They will resume discussions on Tuesday after the U.S. Memorial Day holiday. Beck is scheduled to have another show at the Royal Albert Hall on Tuesday.

Depp, 58, sued ex-wife Heard for $50 million, arguing that she defamed him when she called herself “a public figure representing domestic abuse” in an opinion piece she wrote.

Heard, 36, countersued for $100 million, saying Depp smeared her reputation when his lawyer called her accusations a “hoax”.

Depp fans took to Instagram and Twitter to share their views of the American actor’s performance on stage, but amid the online furor, some concert-goers were less than impressed.

“I felt duped. Totally 100% duped. I had been waiting fifty years to see Jeff Beck live… this was the biggest letdown of my life,” Peter Schmidt, who had come from Frankfurt to London for the concert with his family, told Reuters outside the London venue.

“(Depp) took over the show, he shouldn’t have been there. He is an embarrassment… I went to see Jeff Beck tonight, not a Hollywood star.”