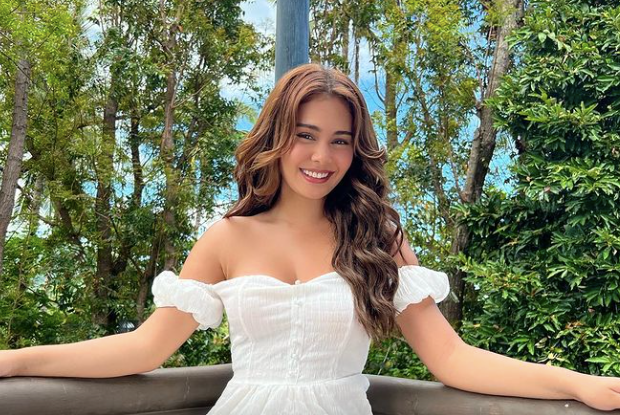 After spending several weeks in Masbate to work on the upcoming ABS-CBN series “A Family Affair,” lead actress Ivana Alawi admitted that she was still feeling uncomfortable around Gerald Anderson, one of her four leading men.

“I still feel shy to act all goofy and to joke around when Gerald is present. He’s such a professional actor, especially when we’re taping. He would stay in one place to internalize and when he’s already in his character, he would be really amazing. I wouldn’t dare act foolish in front of him,” Ivana told reporters during a virtual media gathering, which was also attended by directors Jerome Pobocan and Raymund Ocampo.

Meanwhile, the personality of Sam Milby, whom Ivana confessed to having a crush on before joining the biz, turned out to be the opposite of what she expected. “I really felt intimidated by Sam before because he speaks English. Also, he’s been in this industry for a while now and is a really good actor. I was really feeling nervous before taping my first scene with Sam, but then I noticed that he would also joke around just to make me and everyone on the set feel comfortable around him.”

Ivana continued: “I had a crush on him before. I watched all of his movies and teleserye in ABS-CBN. This was also why I was nervous and scared to work with him. It was good that he turned out to be someone very nice.”

Ivana said his four leading men have different personalities. She would call Jameson Blake her “baby boy,” while Jake Ejercito her “best friend.” She further said: “I’d tell Jameson, ‘Baby Boy, come here!’ He looks so young and innocent. Jake is unbelievably funny. When we’re together, puro kami kalokohan. I feel like I can easily talk with him. I don’t feel uncomfortable joking around with him compared to the others.”

She also claimed to have gotten “close” to all four guys and not just to one. “I can’t pick one because when we’re busy taping, we’re like one big group. We’re always together. We also have a group chat so I’m close to all of them equally,” she insisted. “Gerald is such a professional but he’s also very kind and thoughtful to all of his costars. I appreciated that Sam is so welcoming. He said he doesn’t want anyone to feel ill-at-ease around him so he always tries his best to make everyone laugh. Jake and Jameson are like brothers who are also so caring to me.”

Ivana said she felt their support, especially on the set. “I have nothing but good words for Gerald, with whom I share more scenes compared to the other three. One time, I felt really touched by his gesture. I have this scene where I’m supposed to run barefooted. I know the production team has already swept the floor, but Gerald said, ‘No! Give me the broom! I’ll do it for you.’ In my mind, I said, ‘Wow! This guy is a real gentleman,’” Ivana recalled.

“With Sam, he’s supportive in the sense that when I’m having a hard time focusing on a particular scene, I’d just hold on to him and tell him, ‘Sam, nahihirapan ako.’ He’d ask me how he could be of help. We would talk about our sad experiences, like the time we both lost our dads. Whenever we do that, emotions begin to come out,” said the actress, who is also a vlogger-social media celebrity.

When asked who she thinks is “boyfriend material” from among the four men, Ivana replied: “It’s definitely Paco, Gerald’s character. He loves Cherry (Ivana) so much. I prefer to be with a guy who loves me more than I love him.”

Ivana then went on to describe how similar Cherry is to her true personality. “Based on what I’ve read in the script, Cherry loves her family so much. If you watch my vlogs, you’d see how much I value and appreciate my family,” she pointed out. “The only time I find it difficult to be Cherry is when I have to do my crying scenes because when Ivana cries, palaging pabebe lang. Since this is a drama series I really have to do well. That’s what makes me feel pressured.

“I would sometimes ask my directors, ‘Direk, am I really made for drama because I think I could be better at comedy?’ They would say, ‘You can do this!’ I’m lucky to be working with them. They believe in me and what I’m capable of becoming as an actress in the future. They don’t pressure me to keep on crying. They just tell me to give only what I can, as a result, they inspire me to do better.”

The creation of the series was first announced in December 2021. “I was so excited when this was pitched to me. It’s not just your typical drama series. There are a lot of interesting subplots. There are scenes where, as Cherry, I can be sexy, seductive, thrilling, mysterious, and a lot more,” said the 25-year-old.

“It’s really the story that I found irresistible. I’m really able to relate to Cherry in a lot of aspects. When I read the script, I said it’s perfect for me, especially since it’s my first lead role,” Ivana added.

“A Family Affair” is set to premiere soon on the Kapamilya Channel.