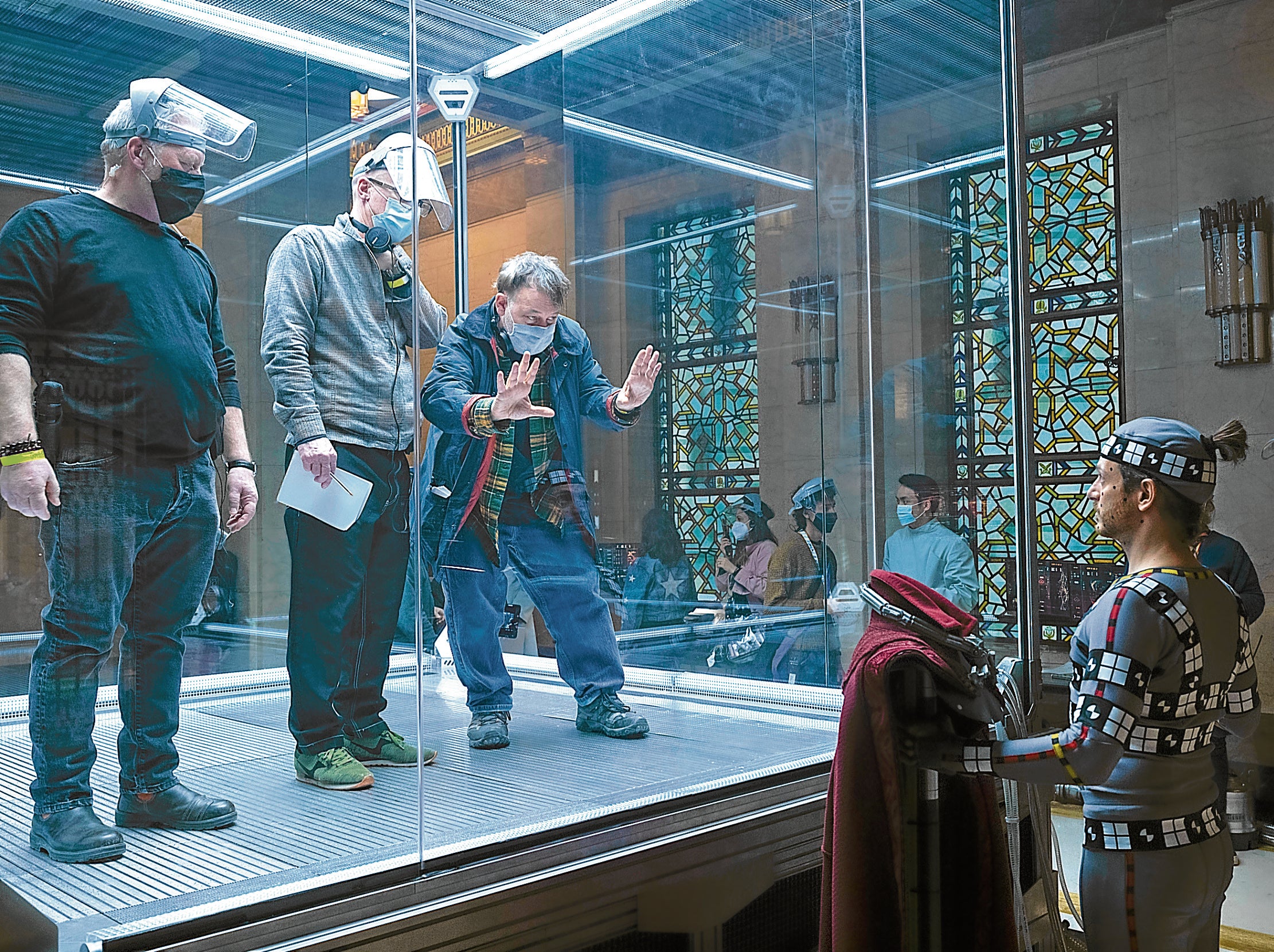 Director Sam Raimi (center) on the set of “Doctor Strange in the Multiverse of Madness”; Benedict Wong as Wong —PHOTOS COURTESY OF MARVEL STUDIOS

It’s certainly more plausible to muse on existential issues these days, especially after we’ve all suffered in some measure from the downbeat repercussions of the pandemic.

It makes you wonder if there’s a “discoverable” portal out there that could beam us up into a parallel world where the odds against our current “inconveniences” are easier to overcome, as alluringly depicted by Sam Raimi’s spectacular “Doctor Strange in the Multiverse of Madness” or Dan Kwan and Daniel Scheinert’s brilliant “Everything Everywhere All at Once.”

When we interviewed “Multiverse of Madness” director Sam Raimi and screenwriter Michael Waldron about their blockbuster movie, we asked them what it was like pursuing the Marvel Cinematic Universe’s ambitious “Doctor Strange” sequel and its mind-bending concept.

Sam said that while it was indeed a terrifying project to take on, he also knew that conquering the obstacles down the road would make the whole endeavor a rewarding experience.

“After my early ‘Spider-Man’ films (which starred Tobey Maguire), it felt great to direct another Marvel superhero movie,” he admitted. “It was so much fun because if you’re a writer like Michael, a producer like Richie Palmer, or a director like me, you’re doing it because you love the comic books. You understand it because it’s in your blood. It’s fun to tell stories that you love, and I love these Marvel superhero tales.

“To create the Multiverse, it was important for me to have the tools to accurately and properly present it to the audience. I needed great definition of what the different places would be. How do they feel? How do they sound? What do they look like?

“We worked together to specifically delineate one universe from the next. I wanted the experience to be unique for the audience, so it was important for me to accurately define the look and feel of these different universes.”

Given the need to “synchronize” this particular story with the rest of the movies in MCU, it’s been a daunting task and a mammoth undertaking, indeed. Asked what he thought was the most difficult hurdle, Sam said, “The biggest challenge was writing the script. Michael took on all these story threads from previous Marvel movies and brought them forward in a logical and entertaining way.”

Michael agreed, “My biggest task as a writer was to create the Multiverse as a real place. After all, you don’t want it to just be a cartoon version of another universe. So, it has to be a fully realized and lived-in world with its own history, character backstories and internal logic that we’re just now checking into. But it was just a matter of figuring out how to realize that in a way that’s exciting and believable for the audience.

“Another challenge was to make sure that the audience would never feel like what they were experiencing was just digesting ‘information,’ because if that’s the case, then they might as well just read a page from Wikipedia.

“As the scope continues to expand outward, you have to hold on to the emotional core of these characters. And as long as the human stories remain grounded and relatable, then we can get as crazy as our imaginations will allow us.”

Who is Sam’s favorite character in the movie?

“It’s a toss-up,” the 62-year-old director revealed. “I’m fond of all of them, but I also have to say that I love Wong (played by Benedict Wong). Initially, I was thinking not to mention this, because Wong’s participation in it is much smaller. But I love Wong!

“I also love America Chavez. Xochitl Gomez a did a wonderful job in exuding the spirit of youth, which flies in the face of Doctor Strange. She doesn’t respect or even trust Stephen as the movie begins.

“But what was most exciting for me was working with great, older actors: Benedict Cumberbatch, from his history of playing Stephen Strange for so many years, and Elizabeth Olsen, with her mastery over the art of performance—which she proved to us in ‘WandaVision.’ It was a blast just watching them interact with each other.”

We quickly realized that the admiration between Sam and Wong was actually mutual—as we soon found out when we talked to the latter in a separate interview.

“It was a real pleasure to work with Sam, who’s a legend in the horror genre (the ‘Evil Dead’ movies),” Benedict Wong said. “Given his history with the ‘Spider-Man’ trilogy, Sam is one of the OGs of the Marvel Cinematic Universe. So it was a pleasant surprise when he himself told me that they wanted to cast me as the Sorcerer Supreme. It was a real gift that day!”

When asked to describe Wong’s evolution as a character through the years, Benedict said, “I felt like a competition winner when I started playing the role six years ago. And bagging the role was truly special for me because I collected comics when I was 14 years old, particularly the Spider-Man and Fantastic Four titles.

“I used to go to this wonderful comic book shop called Odyssey 7, which is sadly no longer there in Manchester. At the time, I would just spend my days in the aisles just sifting through comics. So, who would have thought that it would eventually manifest for me. .. and enable me to tell these stories now?

“This time, though, we’ve done away with the old source material. So, you won’t see Wong serving tea or being servile. Instead, he’s a wise and no-nonsense librarian who’s there to quell Doctor Strange’s ego. We have journeyed with Wong for over five movies now, this being the sixth one, where he’s picked up the gauntlet as the top sorcerer.

“In terms of his relationship with Stephen, they’re very much the odd couple, and yet, they also need each other. The fact that he’s already the Sorcerer Supreme, Wong can now stand toe to toe with Doctor Strange.”