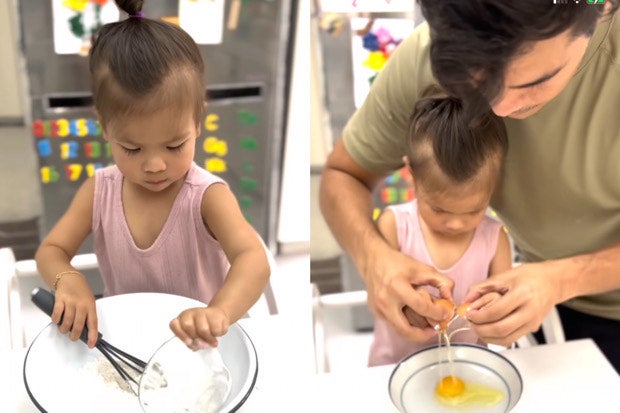 Anne Curtis and Erwan Heussaff’s daughter Dahlia appears to be following the footsteps of her dad as she showed off her “cooking” skills while making pancakes with him.

The celebrity chef treated fans to a glimpse of his bonding moment with Dahlia, as seen on his Instagram page yesterday, May 23.

“We are making ‘a pancakes,'” he said, referencing Dahlia’s introduction in the video. “She’s after my job.”

Dahlia can be seen mixing the ingredients with little assistance from Heussaff. Dahlia was then in awe when her dad put the mixture in the pan while giving out instructions in French.

Curtis gushed over the father-and-daughter moment, admitting that Dahlia had “better” cooking skills than her. Fellow celebrities Nico Bolzico and Isabelle Daza were also charmed by the kid’s cuteness.

“When your daughter cooks better than you,” Curtis said.

“She deserves her show in [FEATR Media],” Bolzico stated, referring to Heussaff’s food and travel channel.

Anne, Heussaff and Dahlia recently went on a trip to Bohol where the couple went on a freediving session. During the trip, Curtis and her sister, actress Jasmine Curtis-Smith, also reunited with their brother Thomas James.  /ra