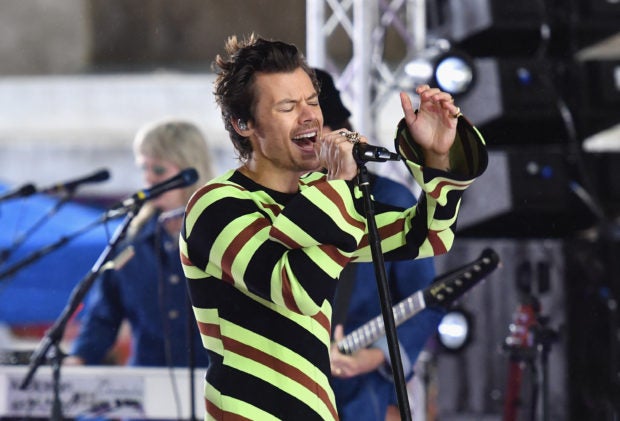 The one-time boy band heartthrob to the teenage masses has grown into a heartthrob for all, and the dulcet tones and tender adulations of “Harry’s House” betray a pop star in love.

The album conjures the sonic equivalent of a warmly lit California afternoon by the pool, all the while showcasing Styles’ increasingly honed songwriting skills — which increasingly vie to make you blush.

“I feel like it’s kind of a collection of all of my favorite things and very much like the album I’ve always wanted to make, so I’m really happy,” Styles said after performing Thursday morning on the “Today” show’s stage at New York’s Rockefeller Plaza.

“It’s definitely the most personal record I think I’ve made,” he told the show. “Obviously, the pandemic and everything kind of added to the way it was made. It was made by a few people in a small room.”

“I think it’s the most free I’ve ever felt making music.”

Styles, born in England, catapulted to fame as part of the group One Direction, which reigned from 2010 to 2016 and remains one of the bestselling boy bands of all time.

Styles released his first solo album in 2017 and jumped to the top of the charts, following up with 2019’s “Fine Line” which also posted resounding commercial success.

And as his solo career blossoms, Styles has come to embody an emotionally available crooner whose charisma, gender-fluid style and sense of compassion have seen him dubbed a champion of inclusion.

In his new song “Boyfriends” he casts himself as the dreamy antithesis of… all boyfriends, running through the faults of toxic masculinity and presenting himself as an ally to the heartbroken.

Emotional, but make it sexy

But he’s much more than a bleeding heart — Styles is thirsty.

“Green eyes, fried rice,” he sings on the bop “Music for A Sushi Restaurant.”

It’s just one of many lyrical choices that read peculiar but in practice just works, a testament to the artist’s sharpened poetic chops and burgeoning willingness to bare the contours of his desires.

Styles is thought to be dating Olivia Wilde, who cast him in the forthcoming psychological thriller “Don’t Worry Darling” which she directed.

“I bring the pop to the cinema / You pop when we get intimate,” he sings in the chorus of the pulsating disco track “Cinema” — a sex ballad of a song that appears to reference his relationship with her.

But for all his suggestive lyrics Styles — whose ascent into celebrity has paralleled a growing scrutiny of the way famous artists are hounded over their personal lives — prefers to keep his private matters just that.

He has faced probing over his sexuality and love life for years, but in a recent interview he said he finds these lines of questioning “outdated.”

“The whole point of where we should be heading, which is toward accepting everybody and being more open, is that it doesn’t matter,” he told Better Homes and Gardens in an interview published last month. “It’s about not having to label everything, not having to clarify what boxes you’re checking.”

That attitude is certainly working for Styles, who as his third album drops counts himself among the globe’s most endearing pop stars.

His consummate likability was on full display as he headlined last month’s Coachella festival, donning a chest-baring, multi-colored disco ball of a jumpsuit to tease his new music before a sea of screaming, hormone-addled fans.

“It’s big in here, innit?” he quipped, laying on the charm he has imbued into his music — coy yet sexy, modest but glam, a modern pop star on top of the world. AP/JB