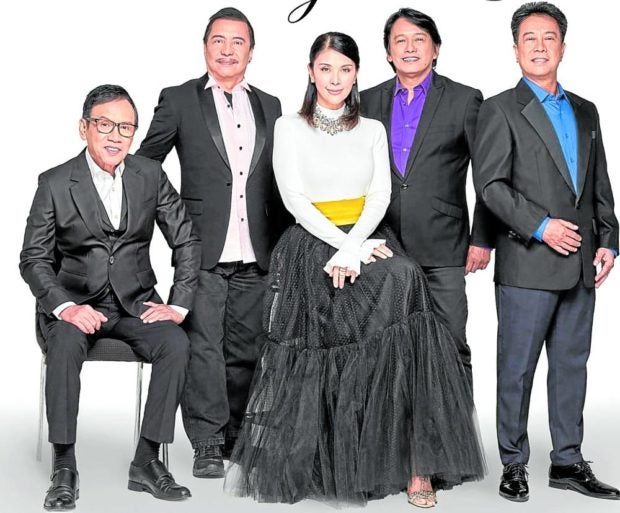 This year’s presidential elections was one of the most “intense” in recent memory, Marco Sison said. But after all the “divisiveness” it caused among people, now there needs to be a “healing process.”

“This is the first time I have experienced an intense election. There was divisiveness, it’s true. We have our own beliefs and our own principles. As a person, an artist and a citizen of this country, I supported someone based on my own principles. But after the election, there should be a healing process,” he said at a press conference for the eight-city US concert tour “Four Kings and a Queen.”

Mounted by Amore Entertainment, the series of shows—which kicks off on June 25 in California and ends on July 17 in Hawaii—features fellow “Hitmakers” Hajji Hajji Alejandro, Nonoy Zuñiga and Rey Valera, as well as special guest Pops Fernandez.

“Let’s give each other a chance to heal and recover,” Marco added. “And then let’s work together and help each other.”

Nonoy lamented that people’s political differences have unfortunately resulted in not a few frayed relationships. “It wasn’t just the politicians who were fighting. Supporters, fans and even families have been fighting and parting ways, because of their preferences. I hope it didn’t have to come to that,” he said.

“So many people are fighting. The things you know truly took place may be different from what they believe in. The discussion will just drag on,” he pointed out. “Let’s respect each other’s choice. Sa’yo ’yan, sa’kin ’to, friends pa rin tayo. I’m still friends with people who voted for different [candidates].”

Hajji, on the other hand, tried to stay apolitical. “You can’t please everyone. You’re automatically cutting your fans in half. Things get polarized,” he said.

Rey has had his share of interactions with various politicians through the years. And if there’s one thing that stuck with him, it’s this: “At the end of the day, you will be surprised—sila-sila din ang nag-uusap-usap at nagkakamayan. But the supporters below them will continue fighting.”

“Look at Gloria Arroyo and Erap (Estrada), magkakasama na ngayon. But there was a certain time when we were protesting (Edsa II),” he recalled.

And although he did receive invitations to take part in political campaigns, Rey refused, worrying that showing his leanings would affect his show on TV5, the videoke game show “Sing Galing.”

“I transferred from ABS-CBN to TV5, along with employees who were retrenched. I felt like you also have the responsibility to help them during the pandemic,” he said. “Because when you go to one side, sigurado may galit na sa’yo.”

Meanwhile, Pops stressed that every Filipino wants the same thing: “A better Philippines. “We want improvement, but we have forgotten that we’re all Filipinos… Nawala ‘yung respect for one another. People are fighting because some feel their choice is better than others,” she said. “We have one goal. I hope we don’t fight.” INQ