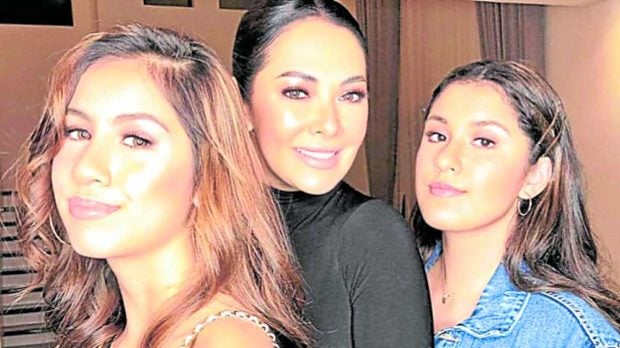 I don’t do to them what my mom did to me while growing up.”

This, in a nutshell, was how actress Ruffa Gutierrez, mother to two teenage daughters, described her parenting style.

Ruffa has always been vocal about how she thought her own mom, former actress Annabelle Rama, had been too strict with her, especially when she was a teenager. This is because Ruffa is the unica hija in the family. She has five brothers.

“I make sure we talk all the time, especially now that Lorin is studying in the United States. Unlike my mom, I play both good and bad cop with them. I’d often say, ‘Girls, this is what you should do. This is what you should avoid.’ While I make them decide for themselves, I’m not too lenient—mahirap din kasi. I’m just grateful and happy that they’re good kids,” she told Inquirer in a recent media gathering.

“I trust Lorin. She’s in a Christian university. She hardly goes out. Every time I call her, she’s just in her dorm. That’s how different young people of today are. They enjoy staying home. Back then, I would always try to sneak out,” Ruffa recalled.

“I’ve already adjusted to not seeing Lorin at home. I just don’t know about her. She stays in a dorm, where she has to cook, clean up and wash her clothes on her own. I think this is good for her. She will learn how to be independent. If she wants to do something bad, which I know she won’t, then that will really be up to her.”

Ruffa then admitted that she hasn’t allowed her girls to get involved in romantic relationships just yet, “but I discuss this with them. You see, every time they see me cry, it’s always because of their dad (Turkish businessman Yilmaz Bektas). I tell them that when they fall in love, they have to choose wisely. I make them realize that I raised them on my own and that I was able to do it alone,” she pointed out. “I see that young people nowadays go out with just anyone, so I tell my girls to choose a God-fearing individual who loves and prioritizes his family, and someone with the right set of values.”

Asked to describe her daughters, Ruffa said: “Venice is tender and softhearted, but very strong. Lorin has always been calculated. She is smart and frank. Looking at them, I think I’ve done a good job. If they finish their studies and become successful, then I’d be truly happy.”

On a more serious note, Ruffa said it was possible that her daughters could be feeling traumatized by her separation from their father. “They saw my pain. Their father has long been out of my life, but they still see me cry because of him. If ever they feel pain, too, they’re mature enough to know that life goes on, that they have me and their grandparents by their side all the time. Maybe, when they finally see their dad again after so many years, all the pain will go away.”

Ruffa recently arranged for the girls to talk with their father for the first time since they left Turkey to stay in the Philippines over a decade ago. She said that while Lorin felt she wasn’t ready, Venice had been willing to talk to Yilmaz on the phone.