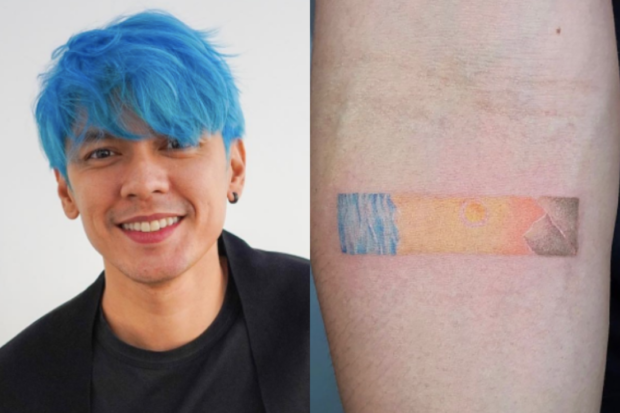 Carlo Aquino had himself inked with a “reversible bar” tattoo, a few days after showing off his new blue hair.

The actor got a colorful tattoo featuring the sun shining over the sea on one side, and mountains on the other, as seen on the Instagram and Facebook pages of Quezon City-based tattoo shop Crimson River Tattoo yesterday, May 20. Aquino can also be seen looking at his arm as the tattoo is being put on his skin.

“Fun concept of a ‘reversible’ bar tattoo by @kara.inks for Carlo Aquino! @jose_liwanag Thank you so much and we love the blue hair!” it stated.

Neither Aquino nor the tattoo parlor gave an explanation of what the tattoo might mean or represent.

Prior to getting his tattoo, Aquino revealed that he had dyed his hair blue, as seen in his Instagram post last Monday, May 16.

Fellow celebrities MJ Lastimosa, Jane Oineza and Jerald Napoles were among those who told Aquino that the new hair color looked good on him, though it is not clear whether the change in hair color is related to any upcoming showbiz project.

Aquino currently appears in the romance series “How to Move on in 30 Days” with actress Maris Racal. The series is about a girl who deals with her broken heart by hiring a fake boyfriend.  /ra