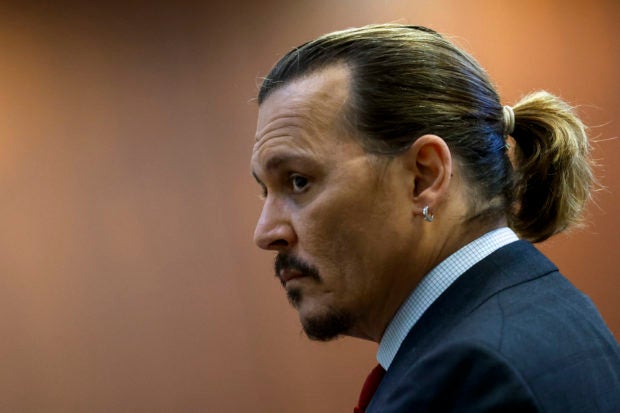 Actor Johnny Depp attends his defamation trial against his ex-wife Amber Heard, at the Fairfax County Circuit Courthouse in Fairfax, Virginia, April 27, 2022. Depp sued Heard for libel in Fairfax County Circuit Court after she wrote an op-ed piece in The Washington Post in 2018 referring to herself as a “public figure representing domestic abuse.” Image: Pool/Jonathan Ernst via AFP

Johnny Depp was dropped from the “Pirates of the Caribbean” franchise because of the domestic abuse allegations made by Amber Heard, his former Hollywood agent said Wednesday, April 27, backing up the actor’s claim against his ex-wife.

“My opinion is that it was related to the accusations that Amber has made,” Christian Carino, who works for Creative Arts Agency, said in a videotaped deposition in the defamation suit filed by Depp against Heard.

Depp filed a defamation case against Heard over a column she wrote for The Washington Post in December 2018 in which she described herself as a “public figure representing domestic abuse.”

The 36-year-old Heard never named the 58-year-old Depp, but he sued her for implying that he was a domestic abuser. He is seeking $50 million in damages.

Carino, Depp and Heard’s former agent, said it was never explicitly stated by Disney that Depp was being dropped from the “Pirates” franchise because of the domestic abuse accusations, but it was “understood.”

Depp, testifying earlier on his own behalf, blamed the accusations by Heard for the loss of his lucrative role in “Pirates” as Captain Jack Sparrow.

Carino, the former fiancé of Lady Gaga, was also asked about Heard’s relationship with billionaire Tesla and SpaceX founder Elon Musk that followed her 2017 divorce from Depp.

Lawyers for Depp read out August 2017 text messages between Carino and Heard, who starred in the movie “Aquaman.”

“Dealing with breakup. I hate when things go public. See, I’m so sad,” Heard said in a message about the end of her relationship with Musk.

Heard responded, “I know but I wanted time to grieve and recover in my own time.”

Asked by a lawyer for Depp if Heard was referring to Musk or Depp, Carino said, “I don’t know.”

He also provided her with some advice. “You could avoid all this if you stopped dating uber-famous people,” he said. “You can be with a big man who isn’t famous.”

Testifying last week, Depp said the allegations that he was a “drunken, cocaine-fueled menace who beat women” have cost him “everything.”

Depp denied ever physically abusing Heard and claimed that she was the one who was frequently violent.

Depp, a three-time Oscar nominee, and Heard met in 2009 on the set of the film “The Rum Diary” and were married in February 2015. Their divorce was finalized two years later. AP