Vice Ganda urges 'trolls' to move on from franchise issue: 'ABS-CBN is no longer after any franchise' | Inquirer Entertainment
Close
menu
search 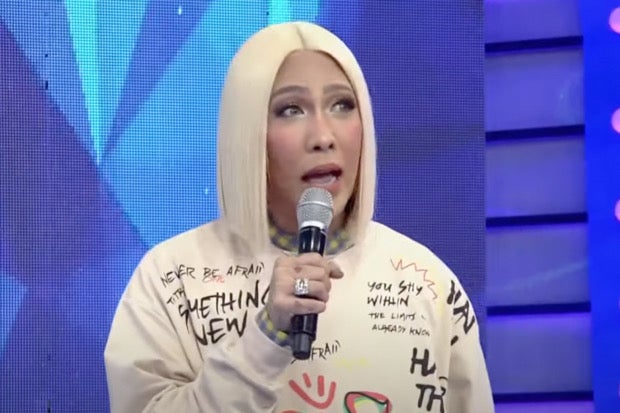 Vice Ganda shut down claims that ABS-CBN artists are making efforts to be granted a franchise, stressing that the network no longer applied for such.

After the performance, Vice Ganda asked the contestant what he would want to say to the next president of the Philippines. The contestant answered his wish for jobs affected during the pandemic to return, adding in particular the jobs lost when ABS-CBN was not granted its franchise.

Vice Ganda then addressed the issues alleging that ABS-CBN artists are only attempting to revive the lost franchise.

Vice Ganda also urged “trolls” to “move on” from the issue, adding that the network continuously offers job opportunities by producing content on different platforms.

(So that should be clear for those trolls who are acting stupid. ABS-CBN is no longer after any franchise. We are not hoping anymore because that chapter is already done.)

Manny Villar-owned Advanced Media Broadcasting System Inc. (AMBS) took over the television broadcast frequencies previously held by ABS-CBN Corporation, after the National Telecommunications Commission (NTC) granted AMBS on Jan. 6 a “test broadcast” permit to use the coveted channel 2 spectrum. According to NTC, the permit will be effective until the final shut off of analog TV, earlier set in 2023.

Meanwhile, Vice Ganda earlier declared his support for presidential candidate Vice President Leni Robredo in a recent campaign rally held in Pasay. He officially endorsed Robredo by raising her hand in front of the crowd, which, according to the event organizers, is estimated to have been over 400,000. JB