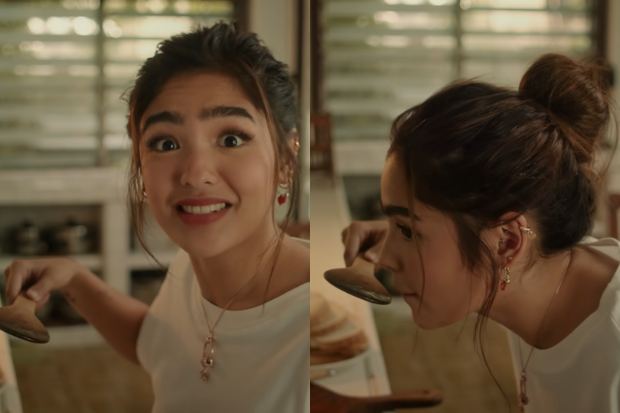 Andrea Brillantes has amused netizens who watched the “Tahanan” music video where she is shown tasting what appears to be oil from a pan while cooking hotdogs.

The “Tahanan” music video, released on O/C Records’ YouTube channel last Wednesday, April 20, features a couple (Brillantes and Adie) having a picnic date and enjoying simple tasks together at home.

Netizens were quick to notice Brillantes taking a sip of the cooking oil and poking fun at the moment via comment on her Facebook post yesterday, April 21.

“Sinabawang hotdog supremacy (Hotdog soup supremacy),” she quipped, then clarified that she was actually tasting water in the scene. 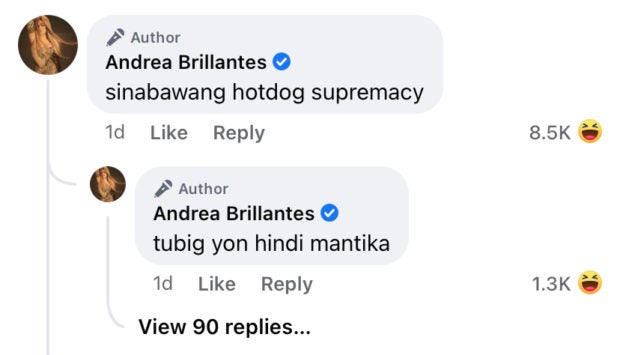 (The music video for “Tahanan” is beautiful but I just want to ask Andrea Brillantes why she tasted the oil for the hotdog she was cooking?)

“Set aside all the issues muna kay Andrea. Dito sa [music video] kinilig ako beeee AHAHAHAHA pwera [lang] sa humigop ng mantika,” one @echoeeeizm, meanwhile, said. (Set aside all issues about Andrea for a while. The music video made me feel giddy, except for the sipping of oil.)

The music video’s director, Kris Cazin, explained that Brillantes tasting the “oil” was “intentional,” as per his Facebook page, also yesterday. He also confirmed that the cooking scene only involved water for safety reasons, adding that Brillantes went off script and said “sarap” instead of “okay naman siya.”

“I just thought it looks dumb so I went for it,” he said.

Aside from “Tahanan,” Adie also released the songs “Paraluman,” “Dungaw” and “Luha,” among others. He starred in the music video for “Paraluman” last year with actress Ivana Alawi.  /ra