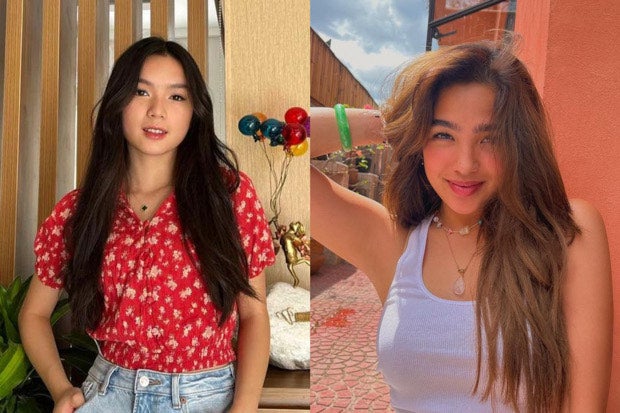 Francine Diaz’s family came to her defense after Andrea Brillantes spoke about issues involving her and Francine.

Brillantes earlier addressed the issues by explaining her “truth” through an Instagram live video.

Diaz’s mom, Merdick, expressed her anger over Brillantes’ statements which supposedly involved her daughter, as per Merdick’s now-deleted post on her Facebook page yesterday, April 12. Merdick reportedly called out Brillantes for “bullying” Francine and always dragging Francine into the issue whenever Brillantes is being bashed.

Merdick said that she is now speaking up because she had enough of Brillantes’ demeanor towards Francine. Merdick also addressed actor Seth Fedelin, pointing out how he did not defend Francine when she was being bashed by their fans over the confrontation issue.

Merdick later on explained her outburst and stressed that she was only hurt by the unkind words thrown at her daughter, as per her Facebook page, also yesterday.

(I burst out because I have had enough. Maybe you will understand, because I am a mother. Thank you to the person who calmed me down, and there are more things we should be thankful for.)

In contrast to Brillantes’ earlier statement, Francine’s cousin Christle also spoke up and claimed that the actress really confronted Francine in a dressing room. Christle shared this in a Facebook post which she appears to have already taken down, as of writing.

Francine’s sister Chantal then dismissed the rumors that a confrontation happened between Francine and Brillantes, but clarified that Brillantes really got “upset” over a photo of Francine and Fedelin. Chantal addressed this on her Twitter page, also yesterday.

“The panunugod (confrontation) is not true, that’s not exactly what happened. What happened was a misunderstanding, [Brillantes] felt that Chin was disrespecting their [love team] when Chin posted an [Instagram Story] picture with the Glam team and Seth,” Chantal said. Chin is Francine’s nickname.

Chantal disclosed that this was the reason why Fedelin visited them and apologized in January, which apparently started another issue. Chantal then expressed dismay over Fedelin and Brillantes who “only saved themselves” but not Francine.

“Chin chose to stay silent nor confirmed any of the rumor for the sake na rin ng peace and friendship na meron sila noon,” Chantal explained. “For me ang unfair lang para sa kapatid ko to be bullied and called names and still think of the other person when she’s been wronged.”

(Chin chose to stay silent [and not] confirm any of the rumors for the sake of peace and the friendship they had back then. For me, it’s unfair for my sister to get bullied and be called names, and still think of the other person when she has been wronged.)

“I was hoping lang din for Blythe sana and Seth to clear it for Chin when they went LIVE but they saved themselves,” she added, calling Brillantes by her real name, Blythe. “Lastly, I’m saying this because both side has cleared up their names and half truths lang ang nasabi. We are all moving forward with the past issue and I hope kayo rin.”

(I was hoping that Blythe and Seth would clear it for Chin when they went live but they [only] saved themselves. Lastly, I’m saying this because both [sides have cleared] their names and only half truths were given. We are all moving forward from the past issue and I hope you do too.)

Hello.
I just want to clear some things in behalf of Francine and some issues that has been circulating for quite some time na. This has been stressing me out as an Ate of Chin and I can or we can no longer stay silent kasi we tried hard to stay silent for peace kaso ang hirap +

Lastly, I’m saying this because both side has cleared up their names and half truths lang ang nasabi. We are all moving forward with the past issue and I hope kayo rin.

Francine is yet to comment on the matter, as of writing.

Meanwhile, she recently starred in the iWantTFC original series “Bola Bola” where she portrays a plus-size woman who considers food as her greatest love. JB

LOOK: Francine Diaz waved at by ‘All of Us Are Dead’ star Yoon Chan-young