Olivia Rodrigo accidentally drops, breaks one of her Grammy trophies 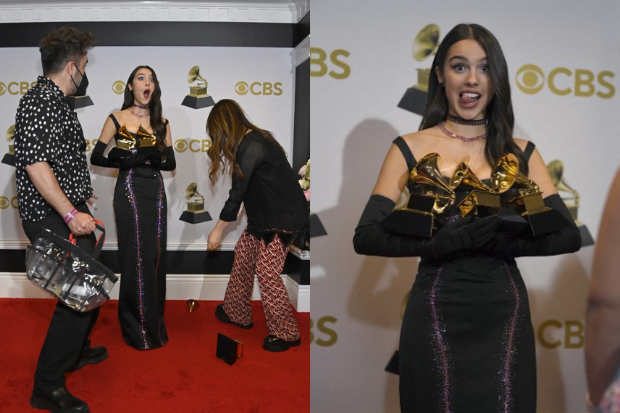 Olivia Rodrigo learned the hard way that Grammy trophies can be quite fragile after she dropped and broke one of hers during a backstage photo opportunity at the music-filled event.

The “deja vu” singer reportedly broke one of the trophies after the awards show while posing for pictures at a backstage press room, as per Variety yesterday, April 4.

The golden trophy hit the red carpet with a clang and Rodrigo was reportedly shocked by what happened, though a photographer joked, “That’s all right, we’ll just put it on your bill,” as seen in a video of the press room captured by Variety, on its Twitter page yesterday.

Fortunately, an assistant temporarily put the trophy back together so Rodrigo could continue posing for pictures, as reported by Page Six, also yesterday.

Rodrigo is not the first artist to have dropped a Grammy. Back in 2010, Rodrigo’s songwriting idol and fellow American pop star Taylor Swift was also in a press room after winning four Grammys when she accidentally broke one of her trophies.

Rodrigo has long credited Swift as a big influence in her career. She finally got in touch with Swift after appearing in “High School Musical: The Musical: The Series,” telling Billboard in May 2021 that the “All Too Well” singer had sent her a note to congratulate her on her success as a musician. Dana Cruz  /ra

Bad Bunny and Olivia Rodrigo are the stars of music streaming