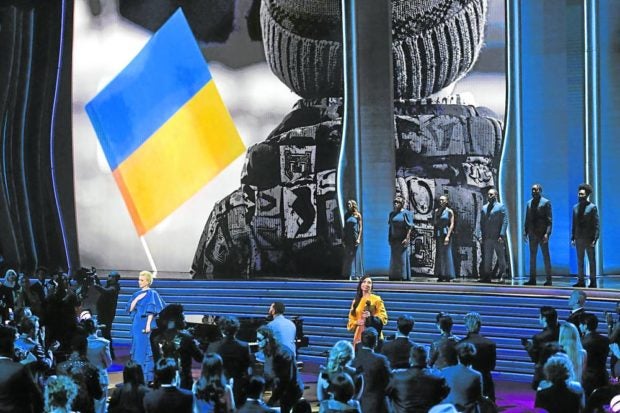 LAS VEGAS — Las Vegas hosting the Grammys for the first time ever might have been an opportunity for the music world to scintillate — but the 64th edition of the industry’s most prestigious awards held on Sunday (Monday in Manila) stayed relatively zipped up.

Some of the night’s key moments, which happily did not include any unscripted scuffles, included Will Smith jokes.

Host Trevor Noah, presenter Questlove and others involved with the day’s events in Sin City managed to get a few digs in at the actor-rapper — a past Grammy winner himself — over his Oscars night slap of comedian Chris Rock.

Comedian Nate Bargatze cracked the first joke at the Oscars’ expense, appearing onstage during the pregala ceremony at which most of the awards were doled out.

“They said comedians have to wear these now at awards shows, during their joke parts,” he said, sporting a giant helmet.

“We’re going to be keeping people’s names out of our mouths,” Noah said at the start of the show, a reference to the expletive-laden tirade Smith shouted at Rock over his joke about Smith’s wife, Jada.

Musician Questlove, who received his Oscar for best documentary in the immediate aftermath of the shocking fracas, later came out to present a Grammy, and quipped: “I am going to present this award and I trust that you people will stay 500 feet away from me.”

The night held a somber moment in support of Ukraine, with President Volodymyr Zelenskyy making a surprise appearance in a pretaped video urging the industry’s top artists to “fill the silence” left by Russia’s invasion with music.

He delivered his pretaped message ahead of a performance from John Legend of the song “Free,” joined by Ukrainian singer Mika Newton, musician Siuzanna Iglidan, and poet Lyuba Yakimchuk.

“What is more opposite to music? The silence of ruined cities and killed people,” Zelenskyy said. “Our musicians wear body armor instead of tuxedos. They sing to the wounded in hospitals — even to those who can’t hear them. But the music will break through anyway.”

“On our land, we are fighting Russia, which brings horrible silence with its bombs,” he continued. “The dead silence. Fill the silence with your music, fill it today to tell our story.”

His appearance on music’s biggest night in the United States comes as global outrage at accusations of Russian war crimes in Ukraine mounts, with the discovery of mass graves and corpses in towns near Kyiv.

Multigenre artist Jon Batiste landed five awards overall, including the night’s biggest prize of album of the year with “We Are,” inspired by the Black Lives Matter movement.

“I believe this to my core — there is no best musician, best artist, best dancer, best actor. The creative arts are subjective,” Batiste said. “I just put my head down and I work on the craft every day.”

Silk Sonic, featuring Bruno Mars and Anderson Paak, claimed the song and record of the year awards for their 1970s inspired hit “Leave the Door Open.”

“We are really trying our hardest to remain humble at this point,” joked Paak as the pair accepted the second honor.

“This is my biggest dream come true. Thank you so much!” Rodrigo said as she held her trophy.

The highest honors in music were postponed from January during a spike in COVID-19 cases and moved from Los Angeles to the MGM Grand Garden Arena in Las Vegas.

Korean pop band BTS, a global phenomenon that has never won a Grammy, left empty-handed again although they delivered a high-octane performance of their hit “Butter,” dodging laser beams in what looked like a scene out of a heist movie.

Rock band Foo Fighters, whose drummer Taylor Hawkins died a little over a week ago, won three awards, including best rock album for “Medicine at Midnight.” No one from the band appeared to accept the trophies.