Beyond the slap: 5 (other) talking points from the Oscars | Inquirer Entertainment
Close
menu
search 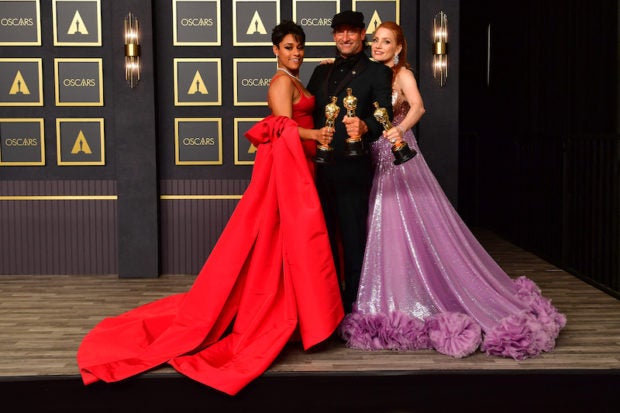 With due respect to a historic best picture win for “CODA,” only one talking point dominated Sunday’s Oscars — Will Smith striking Chris Rock.

That moment seems certain to launch endless memes, but here are five other talking points from the ceremony:

The first Oscars with hosts since 2018 had a trio of women helming the show — Wanda Sykes, Amy Schumer and Regina Hall — who wasted no time compensating for recent humorless years.

Leonardo DiCaprio has “done so much to fight climate change and leave behind a cleaner, greener planet for his girlfriends,” said Schumer, joking about his penchant for younger women.

After “that” shocking moment involving Smith, Schumer — who had last been seen swinging from the ceiling as a superhero webslinger — improvised.

“I’ve been getting out of that Spider-Man costume. Did I miss anything? There’s a different vibe in here,” she said.

Oscars producers had promised to highlight not just this year’s nominated films, but classic movies of the past.

These included a segment on the 50th anniversary of “The Godfather” which brought Francis Ford Coppola, Al Pacino and Robert De Niro to the stage.

Coppola ended his feud with late Paramount production boss Robert Evans, who for decades battled for credit for the original film’s phenomenal success.

“The time is due that I do, because it was his participation and his decisions at the end that made it possible,” said Coppola.

But others — such as a video montage of James Bond films, bizarrely introduced by sporting stars Shaun White, Tony Hawk and Kelly Slater — fell flat.

Another innovation intended to lure back viewers to the Oscars was two prizes voted on by the public via Twitter, including a “fan favorite” film.

If producers had hoped last year’s smash hit “Spider-Man: No Way Home” would win, they were left disappointed.

Zack Snyder’s cult following ensured he won for “Army of the Dead,” and also took the second “Oscars cheer moment” prize for a sequence from a scene in his re-cut version of superhero flick “Justice League.”

The prizes, announced in swift video montages, went almost unnoticed in the room.

His childhood-inspired “Belfast” did not win best picture, but Kenneth Branagh finally won his first Oscar in eight nominations, across a record seven categories.

Branagh won best original screenplay for his deeply personal black-and-white drama about the outbreak of violence in 1960s Northern Ireland, which forced him and his family to flee.

“This story is the search for joy and hope in the face of violence and loss… this means a lot,” he said.

One of the night’s more touching moments came at its finale, as Lady Gaga accompanied Liza Minnelli, in a wheelchair, to announce the best picture winner.

The 76-year-old Minnelli, who won best actress for “Cabaret!” which was released 50 years ago, exclaimed: “Oh that’s so exciting!”

When Minnelli stumbled over her lines, Gaga gently lent over and said “I’ve got you,” before the veteran star announced “CODA” as the night’s historic final winner. JB

Read Next
Japan cheers ‘Drive My Car’ Oscar win, hopes it will raise Haruki Murakami’s profile
EDITORS' PICK
High inflation: Your P1 is now worth only 87 centavos
Geek out at TOYCON 2022 powered by Smart Signature
Unemployment rate up to 6% in May
UK’s Boris Johnson will resign, BBC reports
High-risk pregnancy: Reducing your risk is in your hands
House energy committee chair Arroyo bats for cheap electricity
MOST READ
Suspect in grisly killing of missing woman in Bulacan arrested
Kim Atienza’s daughter flaunts bikini body in response to critics of her ‘revealing photos’
Cop slain in Isabela ambush
FDA probes popular Filipino noodle brand for ‘high level of ethylene oxide’
Don't miss out on the latest news and information.