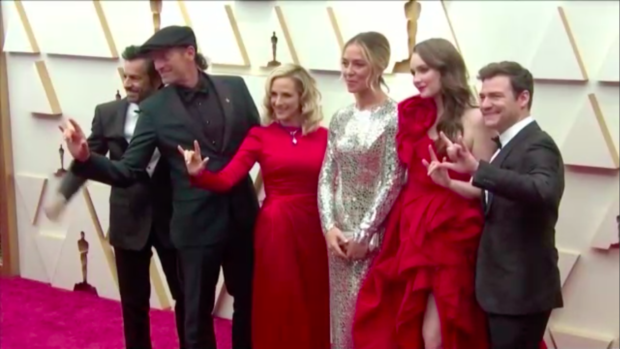 The cast of “CODA” which won best picture at the 94th Academy Awards. Image: screengrab from Reuters video

“CODA” was released by Apple TV+, which beat Netflix Inc’s NFLX.O contender “The Power of the Dog” and other entries from traditional Hollywood studios.

“I really want to thank the academy for recognizing a movie of love and family at this difficult time that we need today,” producer Patrick Wachsberger said in front of the film’s cast stood on stage.

The upbeat atmosphere was disrupted when best actor winner Will Smith slapped presenter Chris Rock onstage over a joke about the actor’s wife, Jada Pinkett Smith. Rock referenced the 1997 movie “G.I. Jane,” in which actress Demi Moore shaved her head.

Smith slapped Rock in what at first appeared to be a scripted joke. But the theater turned somber moments later when Smith, back in his seat, shouted back, “Keep my wife’s name out of your fucking mouth.” The comment was silenced during the live U.S. broadcast.

Smith later apologized to the Academy of Motion Picture Arts and Sciences and to his fellow nominees as he tearfully accepted the Oscar for best actor for playing the father of Venus and Serena Williams in “King Richard.”

In other awards, Jane Campion became just the third woman in the 94-year history of the Oscars to win best director, for her dark Western “Power of the Dog.” 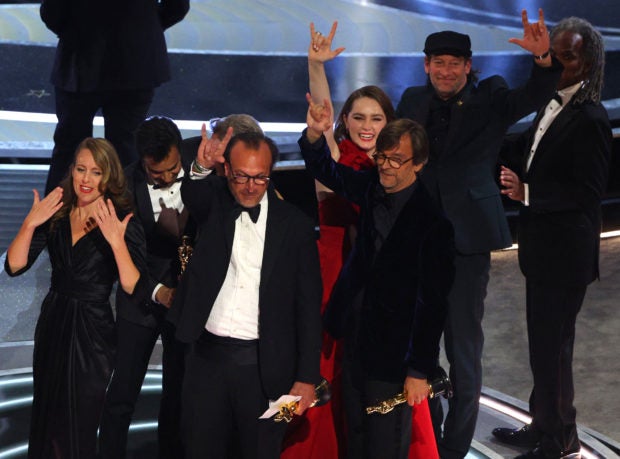 Troy Kotsur made history as the first deaf man to win an Oscar, earning best supporting actor for his role in “CODA.” Kotsur played Frank Rossi, the father of a teenager who struggles to help her family’s fishing business while pursuing her own aspirations in music.

“This is amazing to be here on this journey. I cannot believe I am here,” Kotsur said in a heartfelt speech delivered in sign language as he accepted the supporting actor honor.

Supporting actress went to Ariana DeBose for playing the spirited Anita, who sings “America” in Steven Spielberg’s remake of “West Side Story.” JB