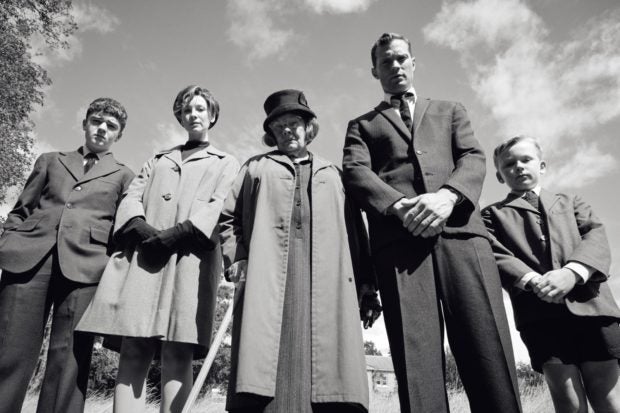 From a bumper 2021 in which sprawling blockbusters finally hit reopened movie theaters, and streaming platforms released more prestige flicks than ever, 10 films remain in contention for the Academy Award for best picture.

Oscars voters had to choose from a diverse shortlist that includes a homoerotic Western, a Japanese meditation on grief and a sprawling sci-fi epic featuring giant sandworms.

Here is a look at the movies vying for the top prize at Sunday’s Oscars:

Kenneth Branagh’s semi-autobiographical “Belfast,” the shortest and most personal film on the list, has long been viewed as a serious Oscars contender.

It depicts the outbreak of violence in his native Northern Ireland in the late 1960s from the perspective of a 9-year-old boy.

Buddy struggles to comprehend the dark events brewing on his street, but is sure he does not want to flee the only home he has ever known.

“Belfast” has won a respectable number of precursor awards, but may have lost some of its early momentum.

Another intimate family drama, “CODA” centers on high school teen Ruby, the only hearing member of a deaf household in a small United States fishing community.

The movie, which cast deaf actors in lead roles and features copious dialogue in sign language, has been celebrated as a landmark in disability representation.

But it also packs serious emotional heft, as the family struggles to support Ruby’s ambition to leave for music school when it relies so heavily on her help to communicate with the outside world.

“CODA” exploded into serious contention with a key win for best cast at the Screen Actors Guild last month, and could have the best chance of unseating “The Power of the Dog.”

Satirical comedy “Don’t Look Up” has the starriest cast of any nominated film this year.

Oscar winners Leonardo DiCaprio, Meryl Streep, Jennifer Lawrence and Cate Blanchett are just a few of the A-listers facing extinction from a massive comet hurtling toward Earth, an allegory for the climate crisis.

“Don’t Look Up” is one of Netflix’s most-watched movies ever, but its sledgehammer politics have split audiences and critics.

Clocking in at a minute under three hours, Japanese drama “Drive My Car” is the longest nominated film, a subtle and slow meditation on grief and loss, adapted from Haruki Murakami’s short story.

“Drive My Car” was adored by cinephiles, winning dozens of critics’ prizes, and the success of South Korea’s “Parasite” two years ago proved subtitles are not the obstacle they once were to Oscars glory.

Seemingly a shoo-in for best international film, “Drive My Car” would still be a shock winner for best picture.

Adapting the first part of Frank Herbert’s seminal novel about feuding noble houses on a planet plagued by giant sandworms, the movie has also been popular with critics, and a sequel is already confirmed.

But its awards success has mainly been limited to technical categories such as visual effects, sound and cinematography, meaning it could lose best picture but still end Oscars night with the most wins overall.

Combining the remarkable real-life story of Venus and Serena Williams with the A-list stardust of Will Smith, “King Richard” is an uplifting crowd-pleaser with strong reviews to match.

Smith delivers a subtle performance as the ambitious father of two future tennis greats, keeping the focus on the Williams’ unorthodox family dynamics and eschewing many of the cliches of sports movies and biopics.

The best actor Oscar appears to be Smith’s to lose, but a best picture win would be an upset.

Paul Thomas Anderson, the writer-director behind “There Will Be Blood” and “Boogie Nights,” is a darling of Hollywood with a cult following.

His latest offbeat offering returns to his native Los Angeles, where a directionless twenty-something woman and a cocky high school boy strike up an unlikely relationship.

Playing out across a series of retro 1970s vignettes, “Licorice Pizza” is a dreamy, idiosyncratic and nostalgic drama, but even fans would likely admit it is not the finest film in the “PTA” canon.

But Guillermo del Toro’s pitch-black noir about a traveling “mind reader” who defrauds rich clients with sham seances is unlikely to match the best picture Oscar of his previous film, “The Shape of Water.”

‘The Power of the Dog’

Since its glitzy world premiere at the Venice film festival in September, Jane Campion’s moody Western “The Power of the Dog” has been the film to beat.

Adapted from Thomas Savage’s novel about toxic masculinity in 1920s Montana, it earned the most Oscar nominations with 12, and racked up the most pre-Oscar award wins from Hollywood guilds and critics’ groups.

But its slow pace and ambiguous meaning have left some voters cold, and with best picture decided by a preferential ballot which favors universally enjoyed movies, a dark horse could still unseat “The Power of the Dog.”

Steven Spielberg’s decision to remake the most-awarded musical film of all time sparked debate the moment it was announced. And while its release was met with glowing reviews, “West Side Story” still has critics who wonder why it was even made.

Ariana DeBose’s performance as Anita is expected to win her an Oscar after numerous precursor awards, and Spielberg is so revered in Hollywood that further gongs cannot be ruled out, but the movie’s odds for best picture remain long. JB

TAGS: Belfast, CODA, Licorice Pizza, The Power of the Dog, West Side Story