Eurovision says Ukraine confirmed for song contest in May 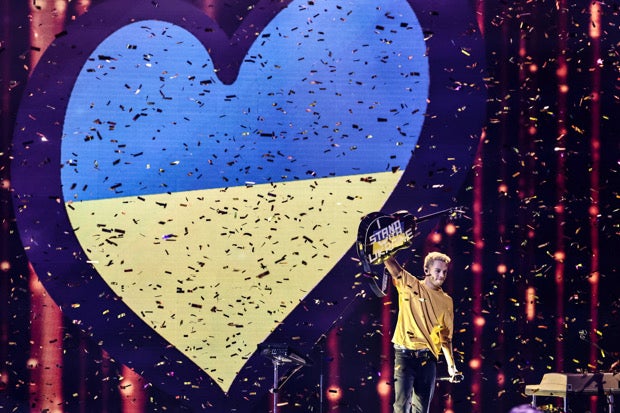 Winner Malik Harris shows his guitar with the lettering “Stand with Ukraine” as he performs his song “Rockstars” at the German preliminary round “Germany 12 Points” of the Eurovision Song Contest (ESC) in Berlin, Germany, on March 4, 2022. Image: Hannibal Hanschke via AFP

The organizers of the Eurovision Song Contest said Monday, March 14, that Ukraine was confirmed to participate in this year’s annual musical pageant in May.

Eurovision executive producer Simona Martorelli said the delegation from Ukraine had confirmed and sent in all required materials, even on time.

“This is absolutely admirable, given the situation,” Martorelli said.

Ukraine’s pick this year is the Kalush Orchestra, with the rap lullaby “Stefania.” Sung to a mother, the song incorporates traditional Ukranian music and includes the line: “I’ll always find my way home even if all the roads are destroyed.”

Martorelli added that the artists would try to tape a “back-up video” required by all those invited to the contest in case they cannot participate live.

“Hopefully they will be able to make it,” Martorelli said.

Eurovision’s executive board decided on Feb. 25 — the day after Russia invaded Ukraine — to exclude Russia from this year’s contest.

The flashy annual musical event, which has millions of viewers in Europe and even Australia, is scheduled for May 10 to 14 in Turin.

Organizers said this year’s contest would focus on the theme of peace. AP/JB