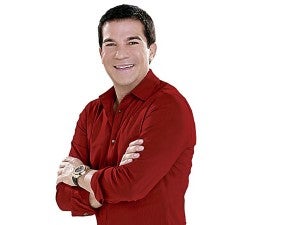 The filing of candidacies for the midterm 2013 elections is just a couple of months away. Once again, people are curious about which celebs are planning to cross over to politics. So far, the names Annabelle Rama, Aga Muhlach and Vic Sotto have been generating the most noise.

How about Edu Manzano? Owing to his failed vice-presidential bid in the 2010 elections, the 56-year-old actor said he’s had enough of politics. For now.

“I gave it my best and I was very sincere,” he told reporters at the recent press con for his coming Sunday noontime game show on TV5, “Game ’N Go.”

Fondly called Doods in show biz circles, Edu pointed out that there are many other ways to serve, even outside of politics. Last year, he spearheaded the construction of a cancer ward in the Philippine Children’s Medical Center, subsequently named after his late father, Adrian Manzano.

“To this day, we support [the project]. It’s for cancer-stricken children below the age of 18. They get their chemotherapy or blood transfusions there,” he said.

Edu, who also served as chairman of the Optical Media Board from 2004 to 2009, said he’s not interested in positions in local government agencies, either.

His son, actor-TV host Luis Manzano recently expressed interest in politics, however. If he had his way, Edu said, he’d rather see Luis render public service some other way. “I told him … I was strongly against it,” Edu said. He’s earning good money and working very hard… there’s always a trade-off.”

He pointed out that he stopped doing movies in 2004 and TV shows in 2007 despite many offers. “I wanted to give my 100 percent [to public service],” he said.

He doesn’t believe in making movies or doing TV shows while holding a public office. He feels that straddling those two worlds is unfair to the voting public. “I don’t believe in quality time—public service is quantity time,” he insisted. “The people trust you with their lives; they deserve your unlimited time and attention.”

Asked if he had discussed with ex-wife and Batangas Gov. Vilma Santos their son’s political aspirations, Edu simply said: “Vilma is entitled to her own opinion, as I am entitled to mine.”

Edu knows that a lot of people are urging Luis to run for a political post in Batangas. And while it could be flattering for his son to see that people trust him in that way, Edu said, sound judgment should prevail.

Luis should understand the implications of all his decisions, Edu said. “For one thing, a failed political stint can affect your show biz career.”

Meanwhile, egged on about his love life, Edu described it as “very quiet.” He doesn’t see himself with a new girlfriend anytime soon, he said, much less getting married again. “If it comes, it comes,” he quipped.

Right now, he said, it’s all about his daughter Adi, 19, and son Enzo, 17. “I want to spend more time with them. I have never been happier with my children.”

Would he allow them to go into show biz? He replied, “As with Luis, the only time I will allow them to face the cameras is after they finish college.”