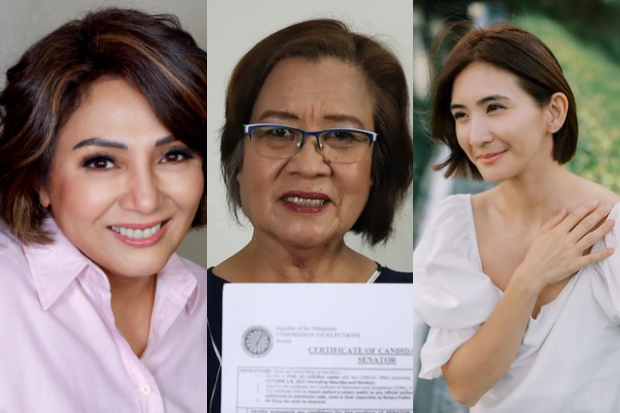 Cherry Pie Picache, Rica Peralejo and other celebrities have expressed their support for Sen. Leila de Lima who is in her fifth year in detention.

Picache, Peralejo and fellow actress Precious Lara Quigaman, along with social media influencer Pipay and talent manager Ogie Diaz, urged the senator to fight on and remain hopeful, as per a release from De Lima’s office today, March 3.

They were interviewed at the sidelines of Vice President Leni Robredo and Sen. Kiko Pangilinan’s Feb. 25 campaign rally in Iloilo, which had a crowd of about 30,000 people. De Lima is part of Robredo’s Senate slate.

“Senator Leila, I just want to thank you po for enduring this time. [Malapit] na malapit na po nating makamit yung matagal na nating hinihintay na hustisya (We will soon achieve the justice we have been waiting for),” Peralejo said.

She also thanked De Lima for “enduring” even if it has been “so unfair and just evil in many ways” for her.

For her part, Quigaman urged De Lima to keep doing “what is right” and not lose hope.

Meanwhile, Pipay said she believes that De Lima is innocent and hoped to meet the senator soon.

Diaz and Picache also expressed their support for De Lima by posing with their hands up for the “D5 hand sign.”

It can be recalled that last year, Picache said that she was praying for De Lima’s release, and thanked her for her service despite being detained, as seen on De Lima’s Facebook page in September 2021.

De Lima has been detained since 2017 because of drug charges that she denied repeatedly.  /ra