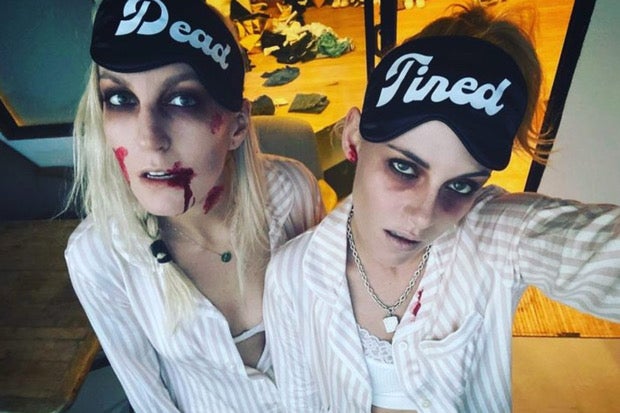 Kristen Stewart and her fiancé, actress-writer Dylan Meyer, had a unique way of celebrating Valentine’s day as they marked the occasion by dressing up as zombies.

Stewart and Meyer wore matching pajama outfits, eyes covered with black makeup and with stains of fake blood on their faces and bodies, as seen on Meyer’s Instagram page yesterday, Feb. 15. The couple also had eye covers as props with the words “Dead” and “Tired” printed on it.

“I’ll play dead with you any time, Valentine,” Meyer said.

Stewart announced their engagement in November last year, having been in a relationship for two years. The “Twilight” actress said that they haven’t set a specific date yet but noted that it will be happening “sooner rather than later.” This she shared in an exclusive interview with “CBS News” on Jan. 30.

“I think it’ll happen when it’s supposed to happen. But I also don’t want to be engaged for, like, five years. Like, we wanna do it, you know what I mean?” Stewart said.

Meanwhile, Stewart recently earned her first Oscar nomination for her starring role in the Pablo Larraín film “Spencer.” She was nominated in the best actress category with her portrayal of Princess Diana. Stewart will be contending with Jessica Chastain (“The Eyes of Tammy Faye”), Olivia Colman (“The Lost Daughter”), Penélope Cruz (“Parallel Mothers”) and Nicole Kidman (“Being the Ricardos”). JB