MANILA, Philippines – Widescope Entertainment is happy to announce another partnership with the Cultural Center of the Philippines for an upcoming special concert series for young virtuosos to play on the Ferrari among pianos, the Fazioli piano. As a musical treat this Valentine’s season, five of the country’s most talented young pianists will be showcasing their exceptional talents in a passion-filled repertoire featuring the likes of Bach, Beethoven, Chopin, Debussy, and more. These young virtuosos whom have shown an impeccable dedication to their craft are ready to perform on one of the Philippines’ most prestigious stages.

Dr. Raul M. Sunico, who obtained his Master of Music Degree from the world’s leader in performing arts education at the Julliard School in New York, is set to host the concert series. First on the roster this February 9th is Ella Gabrielle Gaw, the youngest among the lineup. She’s an incredible nine-year-old talent who garnered prizes in the Singapore International Piano Competition and the Sugree Charoen International Music Competition in Thailand earlier this year. Next is Aidan Ezra Baracol, a former drum enthusiast before discovering his love for piano, who won first prize last year in the 2021 Great Masters Piano Competition and second prize at the WTPA First International Piano Competition in Portugal. Baracol is set to perform classics from his repertoire this February 10th. 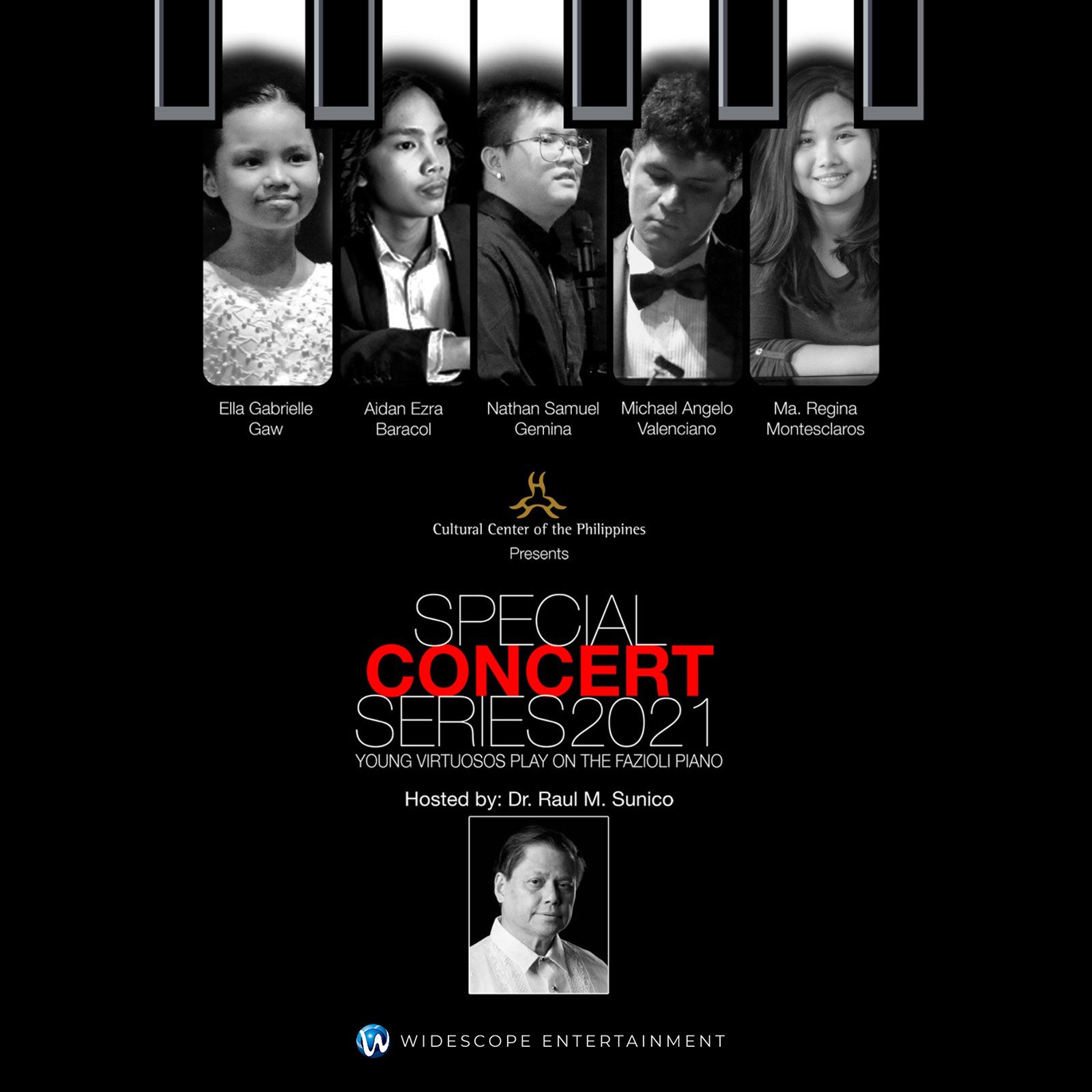 Rounding out the amazing lineup is Regina Montesclaros, who is by far one of the country’s most awarded pianists. Under the tutelage of Prof Cecilia Basilio-Roxas, she’s won the top prize in almost all of the local piano competitions. After only two years at the University of Santo Tomas, she received a scholarship offer from the Royal College of Music in London for her Bachelor’s degree where she later on achieved her master’s.

These extraordinary Filipino talents continue to fuel Widescope Entertainment’s desire to ensure that there’s an avenue for these talented artists to share their amazing gifts and their love for music with the world. As the official music arm for this Special Concert Series, Widescope Entertainment and CCP hope to showcase the best of the best young virtuosos out there. The concert series captures the heart of the Filipino people through the youth and our common love for music. You can tune in to Special Concert Series starting this February 9th, streaming on the CCP and PPO Facebook pages.

Pre-save the performances at the following links:

Being his own concert producer ‘a liberating experience’ for Alden Richards

Anniversary concert marks 10 years of ‘triumphs and struggles’ for Morissette