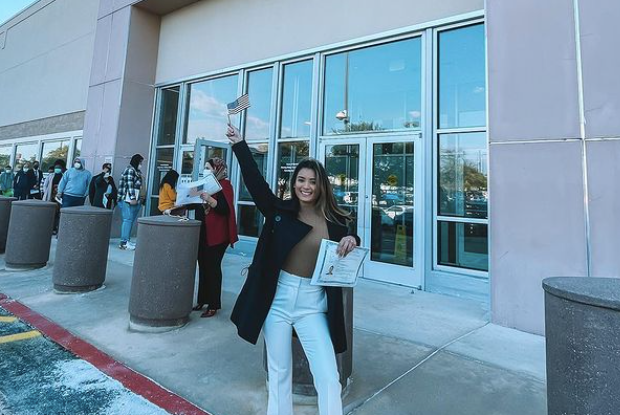 Michelle Madrigal could not help but feel quite emotional after taking her oath as a citizen of the United States, about five years since she first came to the country.

The actress and fitness coach told fans about the milestone by showing herself holding her naturalization certificate in front of an office of the US Citizenship and Immigration Services, as seen on her Instagram page today, Feb. 12.

“It’s the citizenship for me,” she gushed.

Madrigal documented her citizenship interview and showed moments after her oath taking on her YouTube vlog, also today.

She admitted that she kept on thinking of her daughter Anika shortly after her oath taking, though she had to go straight to work and Anika was still in school at the time.

“Gusto ko lang may kasama ditong (I just want to be with my) family to celebrate, but we did it. I’m a US citizen. My gosh, I’m so emotional!” she said.

Madrigal also noted that she wanted to mark the event with her family, especially amid her divorce from her estranged husband Troy Woolfolk.

“With the whole thing going on like with my divorce and everything, ‘pag may malalaking bagay na nangyayari (when big events happen), all you want to be surrounded with is your family,” she told fans.

She also admitted that she was still feeling mixed emotion, but cheerily greeted herself, “Hello, American girl!”

Madrigal was one of the finalists in the ABS-CBN reality talent search “Star Circle Quest.” She has since appeared in various films and TV shows including “FPJ’s Ang Probinsyano,” “Zorro” and “Dyesebel.”

The actress announced her separation from Woolfolk last August 2021. They welcomed their daughter Anika in 2017 and got married in 2019.  /ra

Michelle Madrigal six months after removing breast implants: ‘I feel more like myself’