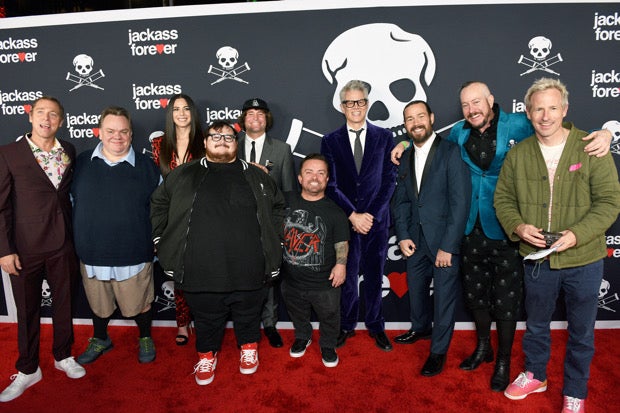 Paramount’s latest iteration of spoofs, gross-out slapstick and painful stunts dreamed up by Johnny Knoxville and his merry pranksters debuted by raking in a cool $23.5 million for the Friday-through-Sunday period, industry watcher Exhibitor Relations estimated.

Twenty years on from its first silver screen release, the franchise has managed to retain some relevance with its fifth installment, and successfully defied Hollywood trends to sneak a pure comedy film — one made for just $10 million, no less — into the number one spot.

“It’s extremely hard to keep it fresh and funny for this long, but Jackass is doing that. Reviews are outstanding (at this point they are usually poor),” said David A. Gross, who runs Franchise Entertainment Research.

“Moonfall” came in at number two, with a modest $10 million take. The Lionsgate sci-fi disaster flick directed by Roland Emmerich and starring Halle Berry revolves around the rather far-fetched scenario that bits of the Moon are tumbling down onto Earth.

Slipping to third was “Spider-Man: No Way Home,” whose spectacular run of late — the best in the COVID era — has slowed. Its $9.6 million in sales brought the Sony/Marvel superhero film to a total of $749 million in domestic sales, placing it fourth all-time.