‘Jackass Forever’ catapults to no. 1 as ‘Moonfall’ craters 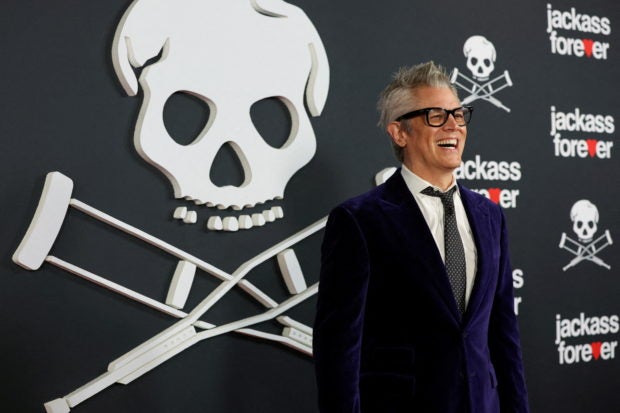 LOS ANGELES — After living through a pandemic for nearly two years, Americans, as it turns out, were in desperate need of a laugh.

“Jackass Forever,” the fourth installment in the ongoing saga of projectiles to the groin, collected $23 million from 3,604 North American locations in its debut, landing on the higher end of expectations.

The latest “Jackass,” starring Johnny Knoxville, Steve-O, Wee Man and other daredevils from MTV days, had been widely expected to win the weekend, but its victory is still surprising and impressive because it has been some time since a pure comedy has claimed the top spot on box office charts.

In catapulting to first place, “Jackass Forever” finally took down reigning champion “Spider-Man: No Way Home,” which has spent six of the last seven weeks at number one.

“Jackass Forever” has been an unexpected hit with critics, notching a strong 90% on Rotten Tomatoes and “B+” CinemaScore from audience members. Variety‘s chief film critic Owen Gleiberman had positive things to say, writing in his review that “Johnny Knoxville and company are now middle aged, but that hasn’t slowed their juvenile masochistic fervor.”

And with a $10 million production budget, “Jackass Forever” will be laughing all the way to the bank.

“It’s extremely hard to keep it fresh and funny for this long, but ‘Jackass’ is doing that,” says David A. Gross, who runs the movie consulting firm Franchise Entertainment Research. “At a cost of only $10 million, the film is going to be very profitable.”

“Moonfall,” the weekend’s other new nationwide release, has less to celebrate. The science-fiction catastrophe film crash-landed on the lower end of projections, bringing in $10.1 million from 3,446 venues.

Those ticket sales are potentially problematic because “Moonfall” cost $140 million to produce, making it one of the most expensive independent films in history.

Commercial sentiment may not help; moviegoers stuck the film with an unenthusiastic “C+” CinemaScore. Unless the movie becomes a huge hit overseas, “Moonfall” likely will not become a financial success.

Emmerich, having turned “Independence Day,” “The Day After Tomorrow” and “2012” into commercial cash-cows, had once been the premier chronicler of big-budget catastrophe. But in the case of “Moonfall,” with Halle Berry, Patrick Wilson, John Bradley, Michael Peña and Donald Sutherland, and centers on efforts to prevent the moon from colliding with Earth, his movies aren’t offering the kind of stress-free escapism that pandemic-fatigued audiences are looking for.

“At the moment, with the world coming apart in real time, who wants to sit through a disaster story? It’s more fun to laugh at ‘Jackass,'” says Gross. GSG/JB