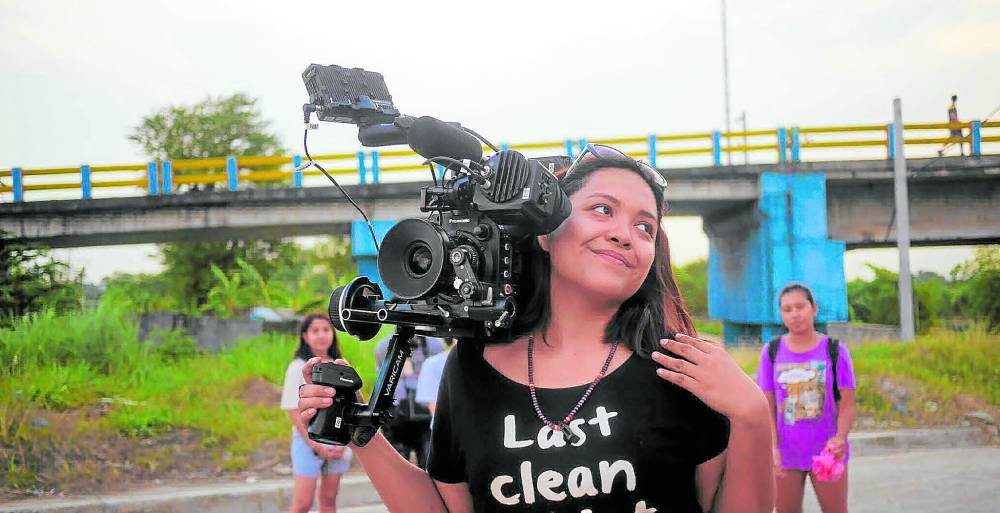 As ecstatic and thankful as she is for recently becoming the first Filipino feature film director to win an award at the prestigious Sundance Film Festival, Martika Ramirez Escobar knows fully well that this recognition comes with a responsibility to keep on doing what she does while staying true to her vision and purpose as a storyteller.

“With this win is a responsibility to make good use of what I have been given as a filmmaker, Filipina, woman, daughter, friend and, simply, a human. Kaya nakaka-pressure—but it’s the good kind of pressure,” the 29-year-old filmmaker said of winning the Special Jury Prize for Innovative Spirit for her directorial debut, “Leonor Will Never Die” on Jan 29.

“Films can speak and we can hear them. So I keep that in mind when I make films. It’s always nice to say something that invites love and goodness to the world, because those are what we need most right now,” she told the Inquirer in an interview.

The last time a Filipino feature film competed at Sundance’s World Cinema-Dramatic category was back in 2006 with Auraeus Solito’s landmark LGBTQ+ film “Ang Pagdadalaga ni Maximo Oliveros.” And in the next 16 years, a spot—much less a win at the said section—proved to be elusive. (The crime mystery flick “Metro Manila,” which won the Audience Award in 2013, had a Filipino cast, but was produced, directed and written by British filmmakers.)

Thus the Film Development Council of the Philippines and the local community hailed Martika’s triumph as nothing short of “historic.”

“I’m grateful because it’s not often that a first-time Filipina filmmaker gets into a big festival such as Sundance. And it’s also not often that an unconventional small-scale film like ours gets recognized. So it all feels like a dream,” Martika said.

Aside from Martika, another young director, Don Josephus Raphael Eblahan, also made history by becoming the first Filipino to win an award at Sundance for a short film.

His entry, “The Headhunter’s Daughter,” competed in the Shorts Program section and took home the Grand Jury Prize.

“The inclusion of two Filipino films at Sundance is a good start for Philippine cinema this year. And I’m sure that this is just the beginning, so I’m excited for what’s next for filmmakers and film lovers alike here and everywhere,” Martika said.

Film within a film

Produced by Monster Jimenez and Mario Cornejo, “Leonor Will Never Die” is a film within film about a retired screenwriter, Leonor (Sheila Francisco), who in her final days, finds herself inside the world of the unfinished gangster film she wrote. As she navigates the world she created, she finds bits and pieces to revise and, eventually, comes up with a perfect ending. Festival juror La Frances Hui, commended the film for its “innovative and risk-taking spirit,” “constantly shifting tone” and its “playful display of the love for cinema.”

In some ways, the creative and production process ended up mirroring the movie’s themes.

The idea for the project came up to her when she was a little girl when she saw action star-turned-politician Joseph Ejercito Estrada get elected as the President of the Philippines. Perhaps people loved movies so much they wanted to be in them, she surmised.

Martika, who likewise works as a camera operator and cinematographer for movies and music videos, began work on “Leonor” when she was 21. Just like her protagonist, Martika ended up doing countless edits and script revisions in the next eight years. She had to wiggle her way out of occasional creative ruts and deal with funding problems that are all so common for independent films.

But with the help of her team—her family—Martika, at long last, “gave birth” to the film at Sundance, which was held online from Utah, United States.

“My incredible team is behind all this. I just can’t help but feel lucky for having them and for getting all these,” she said.

The rest of our interview with Martika:

Sundance was supposed to resume in-person activities this year, but had to revert to online formats, because of the Omicron surge. How did you feel about that?

My team and I were ready to travel and we were already looking forward to experiencing the birth of our film in a cinema filled with people. But uncertainty has been the theme of the pandemic, and so I never really believed anything, unless we were living the moment itself. So I wasn’t sad at all when I learned about the shift to a full online festival. Getting invited to Sundance was already beyond a dream.

A surprising revelation after attending the online festival is that it wasn’t so bad after all! It’s a different viewing experience, but you can’t discount the fact that it’s more comfortable and more people were able to watch our film.

The film took eight years to create. What were the challenges along the way?

Budget is always an independent filmmaker’s biggest challenge, because it then branches out to problems: how to justly compensate everyone for their work; how to pull off difficult scenes; how to keep a humane production with the right number of shooting days.

Did you also find yourself editing or changing the stuff you had already done in the first years of production, as your skills and knowledge as a filmmaker grew?

I first wrote it in 2014 when I was 21. Now, I’m 29 and a completely different person, so I had to grow along with the script. We had a perpetually changing script, but it didn’t really end there. It was also a perpetually changing edit. Now that the film is finally complete, I think every step we made was necessary to come up with the film we have.

What did you enjoy the most about the journey?

Our resources were little, but we had a lot of love on set which was the best part of making this film. It was challenging as it was fun, and we were all on the same boat in wanting to make the shoot a joyful and crazy experience.

In your speech, you dedicated your win to “young aspiring female filmmakers” and all “the dreamers out there.”

I spoke from personal experience. It’s a male-dominated industry, and this is my first feature. Plus, I’m dealing with the ultramacho genre of action—complete with stunts and fistfights. And I’m feminine to the core, so it’s a combination of things that make it difficult for me to make this film … I was lucky to have surpassed the challenges through the support of people. I don’t want this struggle to ever be a reason for a filmmaker to stop wanting to make a film.

Growing up, would you say that you saw enough female filmmakers to look up to?

My favorite filmmaker of all time is Agnes Varda and she defines everything about a woman. But to be honest, most of the films I was exposed to growing up were not made by women. There were a few [female filmmakers] and I mostly know them from romantic comedies.

Are there plans to make “Leonor Will Never Die” available for the local audience?

Yes, of course! This film has a Filipino heart. I made it for us so my dream has always been to screen it in cinemas here. My producer suggested that we already plan pocket screenings for the coming months, but it really depends on the situation, in terms of COVID-19. It would be nice to screen our film in a cinema when gatherings can be safer, hopefully in a few more months.

Are you working on any new projects?

I do have a second feature film in mind, but I hope it won’t take another eight years to make. In the meantime, I’m back to work as a cinematographer-camera operator. I’m also back to baking and selling cookies and spending time at home. The pandemic changed my priorities right now … I want to rest and spend time with my loved ones more.