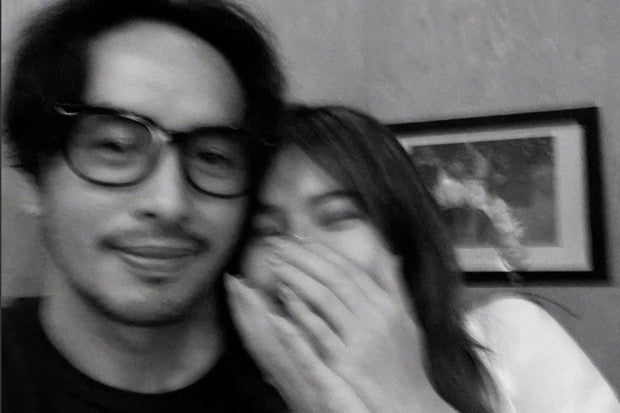 Rico Blanco opened up on how his relationship with Maris Racal started, noting that the actress’ “happy vibe” helps bring out the best in him.

The musician admitted that he initially did not have feelings for Racal despite working with her in projects in the past, as seen in the virtual media conference for “The Goodbye Girl,” on ABS-CBN’s YouTube channel yesterday, Feb. 2. Blanco was asked when he found out he had feelings for the actress and what he thinks of her as a girlfriend.

“We were trying to find out, kami ni Maris (Maris and I), sometime ago how did it happen. Parang little by little lang (Maybe it was just little by little),” he answered.

Blanco noted that during work, he tends to be professional, so he never thought of dating Racal when they were collaborating.

“I think, definitely not the first time I met her. Definitely not when we were working on the song and recording,” he said. “I take pride in my professionalism in the studio and no matter if I think the person that I’m working with is attractive or not, or even on the set when I’m doing acting.”

Blanco then recalled that he and Racal communicated online after working together, and he believes it was during this time that he fell in love with her.

“I think it was sometime after we were done working on the song. Sa mga talks namin siguro. Nagkakamustahan kami, [direct messages] yata,” he said. (Maybe during our talks. We were asking how each other was, maybe through direct messages.)

The former Rivermaya frontman then said that Racal’s positive attitude helps bring out the “child-like fun” in every person, which was something he also observed when he bonded with the actress’ siblings and mother.

“Ang gusto ko kay Maris (What I like about Maris) is she doesn’t even realize it but nakaka-happy ‘yung vibe niya (her vibe makes others happy). It’s something that I think is normal to them magkakapatid (to her and her siblings),” he narrated. “I hung out with the sisters also and the family and even with Maris’ mom and that’s the vibe there, parang barkada (like friends).”

“In general positive, ang positive ng vibe niya (her vibe is so positive). It brings out the best in me. Yung positive side ko nalalabas din kasi minsan nakakalimutan ko din na I’m playful pala (I also get to bring out my positive side because sometimes I forget that I’m playful),” he added. “There’s a bit of child-like fun in every person and then she brings that out.”

Meanwhile, when asked how Blanco is as a boyfriend, Racal described being with him as feeling safe and secure.

“If ‘yung presence ko to him is like fun at happy, sa’kin talaga [he] is pahinga and security. I feel safe when he’s around,” she said. “Feeling ko, any kind of problem or overthinking, kapag sinasabi ko sa kanya, he always gives this logical reason kung bakit ko ‘yun nararamdaman and unti-unti kong naiintindihan ‘yung self ko and whatever I was thinking.”

(If my presence for him is like fun and happy, for me he is rest and security. I feel safe when he’s around. I feel like any kind of problem or overthinking, when I tell it to him, he always gives me this logical reason why I felt it and I gradually understand myself and whatever I was thinking.)

Racal confirmed her relationship with Blanco in May 2021. The two have collaborated on several songs together, such as “Not for Me” in 2021 and “Abot Langit” in 2019. The actress’ song “Ate Sandali” was also produced by Blanco in June 2021, while she co-wrote the track “Asa Naman” with him in September last year.

“The Goodbye Girl” is an upcoming limited series starring Blanco, Racal, Angelica Panganiban and JC de Vera, among others. It follows Yanna (Panganiban), who tells stories of other women whom she gave advice amid their heartbreaks.  /ra