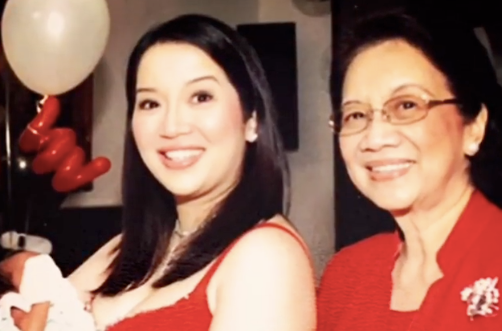 Kris Aquino remembered her mother, late former President Corazon “Cory” Cojuangco-Aquino, on what would have been her 89th birthday.

The actress marked Cory’s birthday while talking about her relationship with her sisters on her Instagram page yesterday, Jan. 25. Her post was accompanied by an art card stating, “other things may change us but we start and end with family.”

Kris, who has been battling an autoimmune disease for years, added that her family has been supportive of all her healthcare decisions. She also noted that her sister Viel has been trying to be understanding of her despite being “shy [and] somewhat ‘allergic’ to the spotlight.”

“Happy Birthday mom, your children are 100% united — exactly what you had always prayed for,” she greeted her late mother.

Kris credited her son Josh for her family’s “rekindled” ties with relatives in the province. Josh has been living in Tarlac since last year.

“It was because of Kuya’s time in our Tarlac Cojuangco compound that we rekindled ties, especially with the children [and] grandchildren of my mom’s [two] brothers,” she told fans. “…Because today was his Lola Cory’s birthday I told Kuya it was okay for him to go back to Tarlac to be with the grieving Cojuangco-Teopaco family because they are the closest and dearest to him.”

Cory, a key figure in the 1986 People Power Revolution, died on Aug. 1, 2009, after battling cancer. She and her husband, late former senator Ninoy Aquino, are both regarded as icons of democracy in the Philippines. Noynoy, who passed away in June 2021, served as the 15th President of the Philippines from 2010 to 2016.  /ra