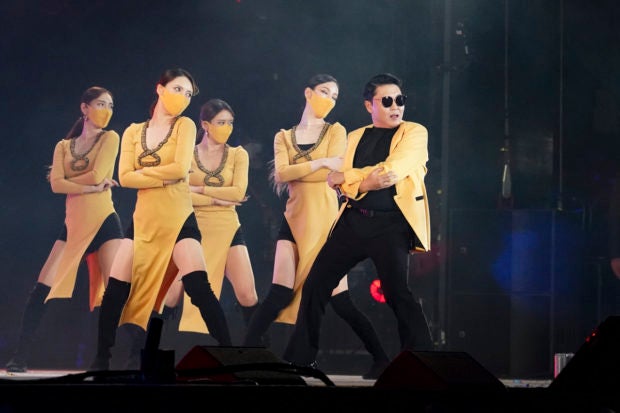 Psy (right) performs at the “KITE: K-pop in the Emirates” concert at Jubilee Park of the World Exposition in Dubai, United Arab Emirates, Sunday. | PHOTO: Yonhap via The Korea Herald/Asia News Network

SEOUL — President Moon Jae-in, who is visiting the United Arab Emirates, attended a concert of South Korean pop artists at Jubilee Park of the World Exposition in Dubai on Sunday with first lady Kim Jung-sook.

Co-hosted by the Korean Cultural Center in the UAE and the Korea Creative Content Agency, the 2 1/2-hour “KITE: K-pop in the Emirates” concert took place to celebrate Korea National Day at Expo 2020 Dubai. It was held in a hybrid form that combines on-site and online performances due to the COVID-19 pandemic.

About 6,000 people were in attendance to enjoy the music event, which featured boy band Stray Kids — honorary ambassadors of the Korea Pavilion at the expo — as well as Sunmi, (G)-Idle, Golden Child, Forestella and Psy.

Moon and the first lady walked into the venue during Psy’s showcase. The artist introduced them to the audience in English and the president waved to the cheering crowd. 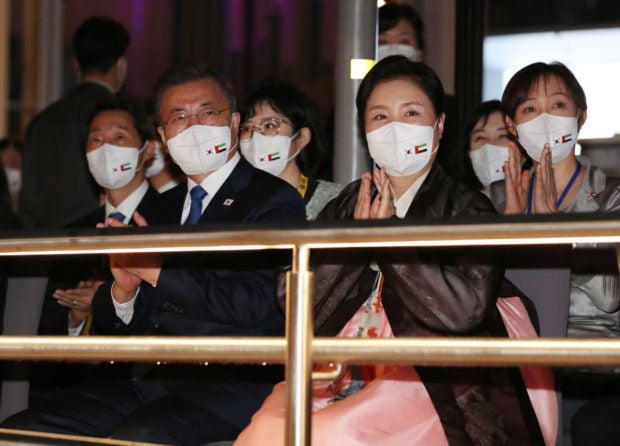 Moon also greeted the K-pop musicians in their waiting rooms after the event. When the president has had the chance to participate in cultural exchange programs in overseas trips, he has often attended events and thanked them for putting efforts into promoting K-pop culture abroad.

For the five-day Korean Week, the Cultural Heritage Administration and Korea Cultural Heritage Foundation also organized various events at the venue. The pavilion’s first 700 visitors were given bokjumeoni, a Korean lucky pouch given as a traditional New Year’s gift.

Under the theme “Massive Vibe,” a special performance in a combination of Korean music, samulnori — a Korean traditional folk music genre that employs four traditional percussion instruments — and digital technology is performed 10 times a day. Visitors can also look around Korean cultural heritage displays and see a mother-of-pearl lacquerware-themed exhibition.

Meanwhile, the Korean Pavilion this year is the fifth-largest among the 191 countries taking part in the expo. More than 500,000 people have visited the Korean venue so far, according to the Cultural Heritage Administration. The Dubai expo began Oct. 1, 2021 and runs through March 31.