Rallying behind the Filipino film industry in 2022 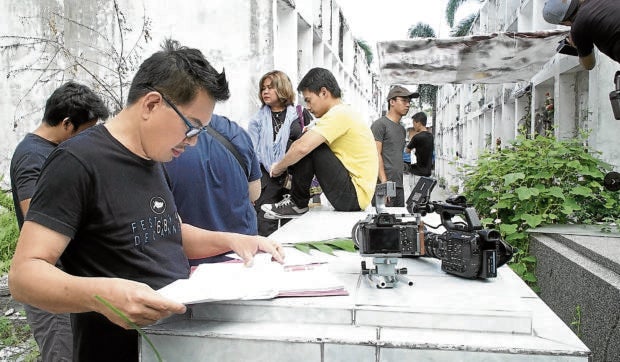 The author (left) preparing for a scene in “Resbak”

Every new year that arrives brings hope for some; for others, trepidation. Nothing is ever certain, and our problems are far from over. But we lose nothing if we continue working toward our aspirations.

The COVID protocols are in place, although the implementation is somewhat more lenient now. But we must not be complacent, even if people are getting vaccinated, and we can feel some freedom and recovery. Yet as we have observed during the recent Metro Manila Film Festival, people may be ready and excited to return to the cinemas, but there is still some hesitation, health-wise and money-wise.

This is both understandable and sad. As most of us are just returning to work and trying to rise from the past two difficult years, naturally Filipinos value every peso they have and try to spend prudently because films are a luxury to many.

In addition to this, they cannot seem to shake off some dissatisfaction toward Philippine-made films. It is true that while we can plead for them to watch the films we make out of patriotism, we must always try to improve our craft and offer them something better.

We do what we can to urge them to return to the cinemas, but people think twice about spending money on something which they believe will not please them. After all, they can always stay at home and wait for the films to be shown on television or on streaming networks. Streaming platforms have given viewers more options, though these have not exactly raised the bar in terms of quality.

Filipinos have been battered by the crisis and the different sources of devastation that have visited the land. Of course, they’re tired. Still, after the ashes, deaths and other challenges, even the most minor improvements are something to be thankful for, and I believe they will only make us stronger.

But questions remain: Can we go back to normal? What is the new normal? Will the election push through? Will the next administration be fair and govern the way they should? There is a lot of doubts.

It is certain, though, that if there’s election this year, tons of money will be released. Whatever the outcome, the film industry and its members will be involved by way of creating campaign materials, endorsing candidates, which will give jobs, benefiting them and the politicians they work for, whether it’s for free or paid for.

The internet has, in a way, blurred the line between what is mainstream and nonmainstream, at least in terms of influence. There’s also the rise of social media influencers and vloggers, who will either spread true, false or doctored information.

These days, it does not seem to matter to some creators—and viewers, for that matter—if a video shows the exact truth. Whether stolen or original, it’s often about creating content or gaining supporters, money or clout.

Often, it’s about people using each other for gain. Regardless of who wins, one way or another, Filipinos will be used. We say, “Vote wisely,” but how wise is “wisely”? How do we become wise enough, so that we can discern what is evil and say no to the corrupt? Whether we are from the film industry or not, what have we taught our own families, and what have we done to help our people get wiser?

Politics is so uncertain, and members of show biz are often associated with it. Wherever they belong, people may choose to be vocal or silent about what they see. I think, when it comes to changing for the better, even if the elected politician is sincere, nothing will happen if we, the citizens, refuse to change and improve ourselves. What is outside is rarely under our control, but in whatever we do, we must make an effort to maintain that inner integrity.

At my age, after all I’ve experienced, I’ve learned to be quiet, to observe; if hurt, to suffer in silence because I know my wounds can heal, and pain isn’t forever. I’ve also learned to be more objective, to control my temper, and not do anything rashly. Perhaps that may not be much, but it’s nonetheless an improvement.

We can listen to different opinions, though that does not mean we must bow to them. I think it is important to look within, because we may be part of the problem. Then, after examining ourselves, we have to try correcting our behavior. Yes, there’s not much that we can do about the past or the things we did out of ignorance or selfishness, but we can do something about the present. It’s necessary to have maturity and a broader understanding, especially for those in public service—and those in the film industry and the media are part of this, for we are placed in a position where we can teach and contribute in various ways.

Though at times we feel helpless and limited, it is good to recognize what we are capable of doing and what we can give. Should we find small opportunities to serve each other and do what’s right, let us take that chance, for great things are built by small things, piece by piece, day by day.

Powers can shift, the world can change in a hundred ways, and years will pass, but in the end, we shall look back at our efforts to assist the industry and the nation—and be our very own judge.

Read Next
Markki Stroem proud to be the model who walks in 7- to 10-inch heels
EDITORS' PICK
A massive highway complex makes living in the South highly attractive
Beyond the Chocolate Hills: A farm-to-table, heritage culinary adventure of Bohol
Metro Manila logged most number of new COVID-19 cases — OCTA Research
House energy committee chair Arroyo bats for cheap electricity
Guarding Sara: Why next VP is getting own security team
WHO says monkeypox is not yet a health emergency
MOST READ
Leon Barretto steps up for sisters, asks dad Dennis Padilla: ‘Please stop resorting to public shaming’
LOOK: Rita Daniela pregnant with first child
Bea Alonzo, under lie detector test, says she wants prenup agreement with future husband
Marjorie Barretto to speak up on Dennis Padilla, kids’ relationship ‘in time’
Don't miss out on the latest news and information.