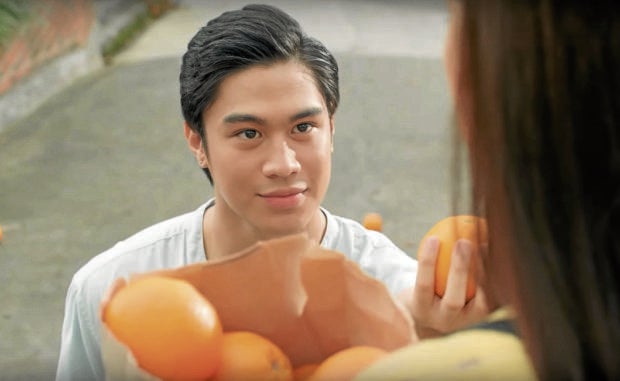 Jeremiah Lisbo as Sky in “Love is Color Blind”

Actor Jeremiah Lisbo, who played the third party in the last two projects of onscreen partners Donny Pangilinan and Belle Mariano (“DonBelle”), recalled experiencing rejections while he was starting as a bit player in his teenage years. “Prior to getting signed up with Star Magic (2019), I was in a dilemma on which college course I wanted to pursue. To resolve this, I asked myself what I really enjoyed doing, even back when I was still a kid: This was to make people happy,” Jeremiah told reporters during a virtual chat to promote the DonBelle movie “Love is Color Blind,” which began streaming on ktx.ph in early December.

Jeremiah took some units in hotel and restaurant management at the Far Eastern University in Manila. “I already tried acting with the help of a talent scout. I experienced being an ‘extra,’ which I found to be difficult because I had to be away for really long hours. This ate up a lot of my time, which wasn’t good because I was still studying.

“There was one time when I had to wait for a whole day, only to be sent home because people involved in the shoot thought I wasn’t probinsyano-looking enough. What’s bad was that I had to skip school because I was on the set since 6 a.m. When it was finally time to shoot my scene at 6 p.m., they questioned why I was there since the role didn’t suit me. I was told, ‘Go home. We will just send you your talent fee.’”

After this upsetting experience, Jeremiah said he then thought of trying his luck in commercial modeling. “I also went through a lot of rejections before I landed my first commercial. I had to endure several auditions, but the plan worked because I got signed up as part of Star Magic Circle’s Batch 2019, which also included Belle,” he recalled.

In 2020, Jeremiah made his TV debut in “Make it With You,” starring another popular love team, Liza Soberano and Enrique Gil (“LizQuen”). In the same year, he got included on the list of 13 actors picked to be part of Rise Artist Studio, a new talent agency developed under Star Cinema.

This led Jeremiah to appear in several Star Cinema productions, such as the digital series “The Four Bad Boys and Me,” and Mae Cruz-Alviar’s drama “Four Sisters Before the Wedding,” where he portrayed Belle’s love interest.

In 2021, he appeared in “Love or Money” and the series “He’s Into Her,” as a third party to the romance of the characters Deib (Donny) and Maxpein (Belle). Last December, Jeremiah became busy promoting two films, “Love is Color Blind” and “Love at First Stream,” which was an official entry to the 2021 Metro Manila Film Festival.

“Now it’s all about giving thanks. I’m so grateful for the trust that my bosses have given me. I’m so busy right now, but I’m not complaining, especially because not all my batchmates in Star Magic were given this opportunity. Others have since even opted to walk a different path,” he pointed out.

After working with DonBelle on two projects, Jeremiah said he also looks at the possibility of becoming the main leading man someday—and his role in “Love at First Stream” is certainly a path in the right direction. “Let’s see if I’m meant to walk that path. It will all depend on the offers that will come my way,” he said.

When asked to talk about Sky, his character in John Leo Datuin Garcia’s “Love is Color Blind,” Jeremiah said he was pleased to be receiving positive feedback from those who saw the movie. “They sympathize with him because Cara (Belle) didn’t choose him. Some even said that they wish for Sky to also meet his ‘The One.’”