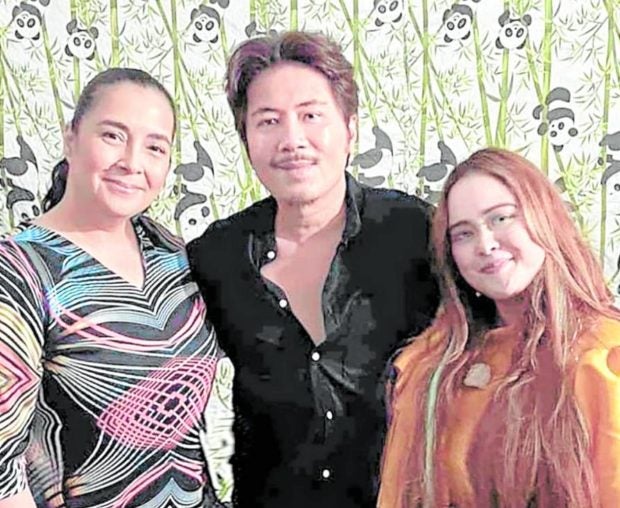 Despite Manilyn Reynes and Bing Loyzaga’s shared romantic history with Janno Gibbs, the two women had nothing but great memories while working on the set of the comedy superhero movie “Mang Jose”—an acting project that brought the erstwhile love triangle together for the first time.

“Nakakatuwang isipin na magkakasama kami … Bing and I had a chance to have this minibonding in our tent. Kwentuhan lang, tumblingan. I enjoyed our happy conversations over meals,” Manilyn said in a virtual conference for the said film, which is now available on Viva Entertainment’s streaming platform, Vivamax.

“It was not hard to say yes when I found out that Bing was also going to be part of the film, because it was a chance for us to work together, after a long, long time,” she added.

The three stars used to be part of the 1980s youth variety program “That’s Entertainment.” And while Manilyn and Janno were among the most popular reel- and real-life tandems back then, the singer-actor ultimately ended up with Bing, with whom he has two children.

“We were just waiting for the right project and this came along. How can I pass up the chance of working with Manilyn for the first time? Of course, I grabbed it,” Bing related. “When I learned that Manilyn would be part of the movie, I teased Janno, ‘Baka naman pwede akong sumali diyan!’ Because I have never worked with Manilyn until this project.”

Because Janno considers “Mang Jose” his “baby,” he asked the producers (Viva Films and Project 8 Projects) if they could make the casting work. “Bing and I have different worlds in show biz, because she mostly does drama series while I do comedies. That’s why we didn’t have a chance to work together,” he said. “And since this project is my baby, I requested for both Bing and Manilyn. I wanted this to be our first time to share the screen.”

While the breakup of Manilyn and Janno’s love team sparked fan wars among supporters of the three actors, there was never an actual beef between Manilyn and Bing. “Ako ang inaway nila,” Janno quipped. “For a good reason!” Bing retorted, laughing.

But turning serious, Manilyn and Bing said that whatever issues written about them in the past were exaggerated, and that they have long moved on. “Kung gaano katagal ‘yung issue, ganun katagal na rin namin siyang iniwan. And besides, we never had an issue—there were no conversations or fights. It was just blown out of proportion,” she said.

“That was so long ago. So when Bing and I see each other, happy lang. No more looking back,” said Manilyn, who’s married to Aljon Jimenez, with whom she has three kids.

In fact, Manilyn, Bing and Janno have traveled together with their respective families, in Japan, years ago.

More than anything else, it’s the excitement over the Janno-Manilyn reunion that prevailed. “I was so excited because their fans haven’t seen them in a very long while,” Bing said of the love team that last appeared in the 1996 movie “Ober Da Bakod 2: Da Treasure Adbentyur.”

“It’s a blessing to be able to work with them. I used to feel I was a hindrance to their love team, but it’s great because we ended up being friends. I’m thrilled to be part of their love team revival, because many people grew up watching them…”

Manilyn, on the other hand, said her husband was just as excited. “He’s also excited for the fans,” she said. “It’s great that lots of our fans are still looking forward to what we do … Before we started shooting, they were already curious to know about our roles, if there were kilig moments. Nabuhayan sila,” she said.

In “Mang Jose,” directed by Rayn Brizuela, Janno plays the titular superhero whose special ability includes absorbing energy and redirecting it. People in distress call for his help. The catch, however, is that Mang Jose charges a few thousand pesos for his services.

One day, the villain King Ina (Manilyn)—backed by her army called the Turborats—wreaks havoc on the city, controlling the citizens’ minds after making them drink cursed free milk tea. When they abduct Tina (Bing), her son, Tope (Mikoy Morales), hires Mang Jose to bring her mother back.

“Mang Jose is just practical, which makes him realistic. He’s a superhero, but also a man with needs,” Janno said of his character, who also brings to light how people control money and how they are controlled by it.

The movie was featured at the Bucheon International Film Festival in July 2021. “It’s a comedy, but it’s also very meaty. It’s about time that we showcase something that also shows our fun side. Usually, what people [abroad] see [in festivals] are poverty or grim realities. This time, it’s something fun,” Janno said.

Read Next
Love Knots, January 14, 2022
EDITORS' PICK
Acer starts the year off strong with the Aspire Vero National Geographic Edition
Gear up and get ready to play with Yamaha Mio Gear
PH to import 60,000 tons of fish to cover shortage
Workers are exempted from ‘no vax, no ride’ policy – DOLE chief
Over 3 Million worth of prizes to be won at Smart Padala’s SENDali Manalo Promo!
#VotePH2022: COVID, power woes loom as poll concerns
MOST READ
Guevarra to Acosta: Obey rules on unvaccinated
Emma Stone calls Andrew Garfield a ‘jerk’ after he ‘lied’ about his ‘Spider-Man: No Way Home’ appearance
Cold-case investigation names surprise suspect in Anne Frank’s betrayal
Czech anti-vax singer dies after deliberate infection
Don't miss out on the latest news and information.