'Mano Po Legacy: The Family Fortune' by Regal Entertainment is off to a roaring start | Inquirer Entertainment
Close
menu
search

‘Mano Po Legacy: The Family Fortune’ by Regal Entertainment is off to a roaring start 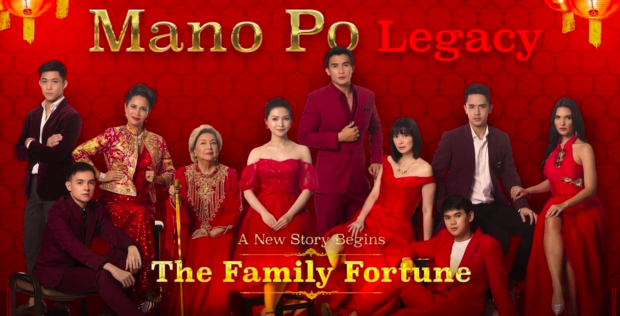 “Mano Po Legacy: The Family Fortune” by Regal Entertainment, Inc. is off to a roaring start as the pilot episode that aired on Monday at 9:35 p.m. on GMA Network could not have turned out better than expected and anticipated by all. WOW! And WOW!! and WOW!!! What an unbelievable, incredible stupendously total movie experience — at home — it was for me and my other family members. To this moment, I can’t quite believe television watching at home could ever feel like I was inside a movie theater. But then, upon reflection, I can only say and concede, “Yep, it’s only Regal who can accomplish such an impossible feat and a first of its kind on local television.”

Watching the pilot episode will cater to all of you since it brings the movie franchise to a whole new platform in media which is on free television. With that, the qualities that made all the “Mano Po” series of movies great in their aspects were present here. While watching the series you will get “movie vibes” in how it is presented are as crisp, glossy, and refined as they come and as a viewer — at home — these are innovative and welcome changes, of course.

Clearly, the way this series has been built is with the most utmost care in its pre-production to post-production and everything else in between those two integral steps in making a prime-time television drama series of this caliber to be brought to life. One reason for that is that there will be a lot of cynical and jaded eyes awaiting how the “Mano Po” primetime drama television series will pan out. The expectation level is very high for this one to succeed. Well, too bad for them, the masters of their craft in showbiz are at work here and they are none other than the Monteverdes and director Joey Javier Reyes, and they are showing the world what they can do in what would be their latest masterpiece in “Mano Po Legacy: The Family Fortune.”

That is one big reason why the transition of the “Mano Po” movie franchise to free television has been welcomed with open arms by viewers at home because nothing is lost here in this new series of “Mano Po Legacy: The Family Fortune” in what you would normally experience had it been you were watching this series in a movie theatre.

That is literally what you can call a very smooth transition from the movies to television which is a rare and difficult feat on its own considering everything that is besetting the country and the whole world right now. Seemingly, the negative emotions that one would normally experience and could affect everyone involved in this endeavor during this production are not here because some viewers at home will see those in the episodes as they come out and can tell if there is something awry about how the series.

Now, on another note. The range of actors you have here is encompassing because you not only have some generational heavy hitters in showbiz like Barbie Forteza, Sunshine Cruz, Maricel Laxa-Pangilinan and Ms. Boots Anson Roa. But they are joined as well by a group of young stars, some of whom have a few years of showbiz experience in them, and a handful who are totally brand new but show promise based on the shown episodes already. Their names are Casie Banks, Rob Gomez, Dustin Uy, David Licauco, Nikki Co and Darwin Yu.

With such a starstudded cast but very diverse in terms of the generation they come from, their respective backgrounds, and their individual strengths as actors, the whole cast of “Mano Po Legacy: The Family Fortune” is literally one for the ages, I must say.

As much as the series is a platform for the current big stars now to continue to entertain their loyal fans, it is also a window to the near future of the faces in showbiz we will be seeing a lot more of, for sure. In a way, the casting choices here reflect honoring the past, showcasing the present, and opening more doors for the future in its aforementioned young stars.

Sounds complex, but not really, when you have a plan in place that will benefit the industry in the long run.

Watch out for these five young promising stars of the series: Banks, Gomez, Uy, Yu and Co.

The love for teledramas and primetime teleseryes is ingrained in the country we live in. For one reason, we all enjoy watching great acting, and of all the movie genres it is in drama where one can draw out the best emotions of any actor due to the intense, heavy, and demanding scenes. But one other reason that people want drama in television is when it is made with expertise as is now being shown in “Mano Po Legacy: The Family Fortune.”

“Mano Po Legacy: The Family Fortune” is a riveting and compelling primetime television drama series that only demands and requires assiduous and close attention if you do not want to miss out on any single episode because this is a very fast-paced prime time drama television series. So watch it every day, Monday to Friday at 9:35 p.m. on GMA Network.

Read Next
Gal Gadot admits ‘Imagine’ cover with fellow stars ‘in poor taste’
EDITORS' PICK
Acer starts the year off strong with the Aspire Vero National Geographic Edition
Gear up and get ready to play with Yamaha Mio Gear
PH to import 60,000 tons of fish to cover shortage
Workers are exempted from ‘no vax, no ride’ policy – DOLE chief
Over 3 Million worth of prizes to be won at Smart Padala’s SENDali Manalo Promo!
#VotePH2022: COVID, power woes loom as poll concerns
MOST READ
Guevarra to Acosta: Obey rules on unvaccinated
Emma Stone calls Andrew Garfield a ‘jerk’ after he ‘lied’ about his ‘Spider-Man: No Way Home’ appearance
Cold-case investigation names surprise suspect in Anne Frank’s betrayal
Czech anti-vax singer dies after deliberate infection
Don't miss out on the latest news and information.