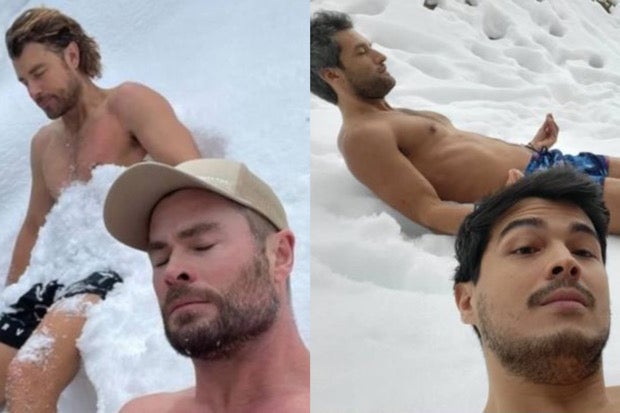 Nico Bolzico and Erwan Heussaff have been enjoying the snow in France with their trademark humor and decided to recreate Australian actor Chris Hemsworth’s “snow bath” photo.

Bolzico gave fans a glimpse of his and celebrity chef Heussaff’s version of a “snow bath,” where they laid down in the snow with nothing but their shorts on, as seen on Bolzico’s Instagram page on Tuesday, Jan. 4.

Hemsworth’s photo, which inspired the brothers-in-law, shows the shirtless “Thor” star in what appears to be a meditating position while a friend of his is half-buried in the snow, as seen on Hemsworth’s Instagram page last Dec. 30.

Bolzico also joked about being “friends” with Hemsworth, and supposedly having a chat group where they “exchange crazy ideas and talk about random stuff.”

“[Here’s] a funny intimate super close friends moment, when we actually replicated a picture that was [sent] to the chat group,” he said. “Crazy fun with these [people], we are really super close.”

Heussaff, for his part, supported Bolzico’s statement via the comment section, saying “Chris is a riot.”

Bolzico and his wife, actress Solenn Heussaff, recently celebrated their daughter Thylane’s second birthday with Erwan, actress Anne Curtis, and Erwan and Curtis’ daughter Dahlia. They marked the occasion with outdoor activities in the snowy mountain landscapes of the French commune Chamonix. JB

WATCH: Thylane Bolzico visits her grandparents in Spain for the first time