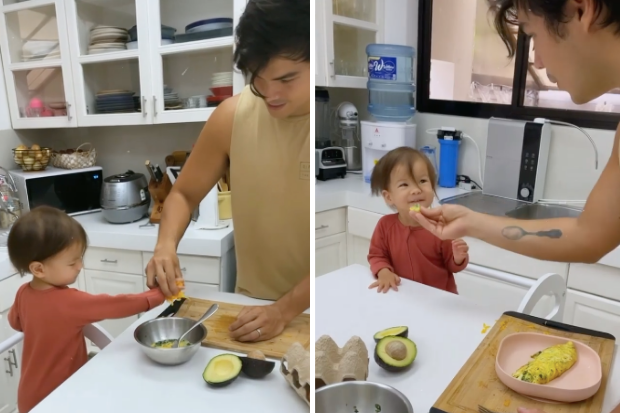 Celebrity mom Anne Curtis could not help but gush over her daughter and husband bonding, specifically when the two made breakfast together yesterday, July 9.

“Mornings with Little D and Papa E [sunflower emoji] So much fun watching these 2 make brekkie together. I get so kilig [heart emoji],” Curtis posted on Instagram.

Curtis then presented some “things to watch out for” in the video, which include seeing how much baby Dahlia loves bread and “the way she twiddles her fingers while patiently waiting for her food.”

Fans would also be fascinated to see how Dahlia is picking up on how her mother says “hot,” and her “figuring out the difference between blowing her nose and blowing using just her mouth.”

With Curtis behind the camera, the almost two-minute clip shows the father-daughter duo make a cheese and spinach omelette, with baby Dahlia sprinkling the cheese on the egg herself.

Fans can likewise watch Baby Dahlia also trying to say her “own version of avocado” after she saw one on the table, although she ended up adorably saying gibberish instead.

Curtis and Heussaff then immediately tried to teach Dahlia how to properly say avocado at the same time, which the mother pointed out in the caption: “the way parents are in sync when excited about teaching a new word.”

Curtis also asked fans to look at “the way she (Dahlia) carefully judges the taste of her papa’s cheese and spinach omelette,” then teased Erwan Heussaff if their daughter is ready to appear on his FEATr YouTube cooking channel.

Curtis and Heussaff welcomed baby Dahlia, their first child, in March 2020. They tied the knot back in 2017.  /ra