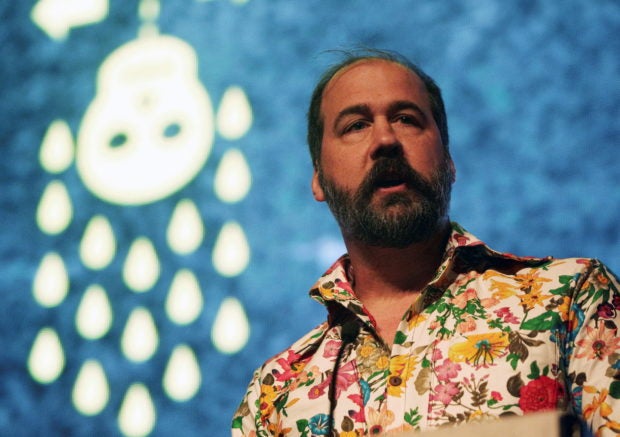 Former Nirvana bassist Krist Novoselic speaks to the visitors at the premiere of the “Nirvana: Taking Punk to the Masses” exhibit at the EMP in Seattle April 15, 2011. Image: Reuters/Anthony Bolante

A federal judge in Los Angeles has dismissed a lawsuit by a man who said the grunge rock group Nirvana sexually exploited him by putting a photo of him as a naked, four-month-old baby on the cover of its classic 1991 album “Nevermind.”

United States district judge Fernando Olguin on Monday dismissed the lawsuit after the plaintiff Spencer Elden missed a deadline to respond to the defendants’ motion to dismiss the case.

Olguin gave Elden until Jan. 13 to file an amended complaint to address alleged problems the defendants identified in his case.

A lawyer for Elden did not immediately respond to requests for comment on Tuesday.

In his lawsuit filed last August, Elden, by then aged 30, claimed he had suffered “lifelong damages” from the album cover, which depicted him swimming naked toward a dollar bill pierced with a fish hook.

“Nevermind” is one of the bestselling albums ever, with sales topping 30 million worldwide. It features Nirvana’s signature song “Smells Like Teen Spirit.”

In seeking a dismissal of Elden’s case, the defendants said his claim that the photo amounted to child pornography was “on its face, not serious” under the circumstances.

They cited a 1994 court ruling which said no one could seriously believe a painting by French Impressionist Pierre-Auguste Renoir of a nude woman, or an innocuous family photo of a naked child in a bathtub, violated child pornography laws.

The defendants also said Elden could not claim to be a victim after spending three decades “profiting from his celebrity as the self-anointed ‘Nirvana Baby.'”

Elden has posed as an adult to recreate the photo, including with “Nevermind” tattooed on his chest. JB

Read Next
Foxes on the pressure that led to her 4-year break and writing much of her latest music in the kitchen
EDITORS' PICK
Australian Open: Rafael Nadal beats Berrettini to reach final
I’ll fight evil and misdeeds no matter what it takes—Guanzon on BBM party’s disbarment threat
Step up your vlog game with vivo’s newest smartphone
COVID-19 cases in NCR, nearby provinces now going down — OCTA
NUSTAR Resort and Casino: Cebu’s next lifestyle and leisure gem
Rise to perfection: Spot on tiles for your stair risers
MOST READ
Fully vaxxed nationals of non-visa required countries allowed entry to PH starting Feb. 10
Palace: Facility quarantine no longer required for fully vaxxed travelers starting Feb. 1
Leni mansplained? Abunda ‘interruptions’ stir own buzz
6 areas to be placed under Alert Level 3 from Jan. 28 to Feb. 15
Don't miss out on the latest news and information.